After half a year of happily turning out parts, we started having problems with our Makerbot a few weeks ago.  Parts were refusing to stick properly to the print bed.  At first, it was only a few large prints that gave problems, as the corners of the part would curl up after a few hours of printing.  Printing with a raft, or manually designing tie-down pads on the part, helped and most of the parts were still usable.  Then abruptly the problem became much worse, with any attempt to print anything other than a very small part failing as the part broke completely free from the bed.

When watching a print to try and see what was going wrong, I noticed that the printer was struggling to keep the print bed at the proper temperature.  It took a lot longer than I remembered for it to reach working temperature when starting a print, and then the bed would sometimes drift below its target temperature while printing.

On closer inspection, I noticed massive discoloration on one of the pins of the print bed power cable. 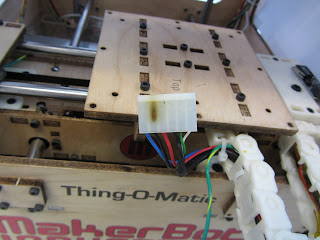 The cable to the print bed is one of the first parts to fail on a Makerbot Thing-O-Matic.  The cable support chain I built earlier protected the cable from snagging or getting pinched in moving printer parts, but it didn't protect the cable from overheating.  The connector used on the print bed is not rated for the current that's being put through it.  Over time, the ground pin on the connector heated up hot enough for long enough and became oxidized and discolored.  Oxidization increases the connector resistance, which increases the heat generated at the connector, so it's a problem that only gets worse over time.

The connector and cable assembly carries both power to the bed heater (and print bed conveyor motor, which I never installed) and the signal from the bed temperature sensor.  The temperature sense lines seemed fine, so I initially set out to replace only the high-power pins and leave the sense lines as they were.  I carefully cut the connectors on both the cable and the bed apart, discarding the oxidized power pins, and then installed a 2 pin power connector we had at the office in its place. 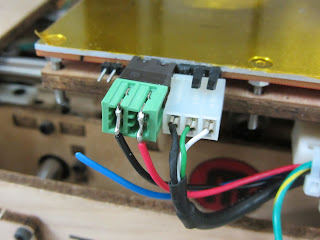 This didn't work quite as well as I hoped - the stress on the remaining pins of the original connector cracked the epoxy holding their pads to the print bed.  Not wanting to risk damaging the bed, I desoldered the remaining half of the connector, soldered on a smaller 3 pin terminal strip from the junk bin, and then epoxied both connectors in place securely. 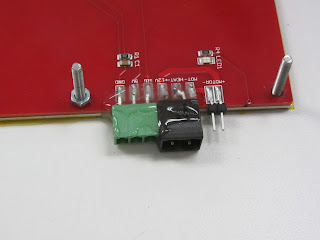 Wired up everything, powered the printer back up, and tested the ability of the head to hold temperature. 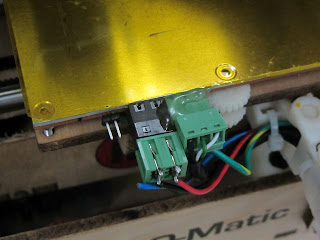 Everything looked OK, so I started a simple print.

The control electronics for the Makerbot Thingomatic are located inside the base, such that you have to turn the printer onto its side, unscrew and remove the base plate to get at them.  This was enough of a hassle when trying to trouble-shoot an intermittent electrical connection that I spent an afternoon moving all of the electronics onto the outside side and back of the printer where I could perform continuity checks mid-print.  I managed to do this without having to lengthen any of the cables. 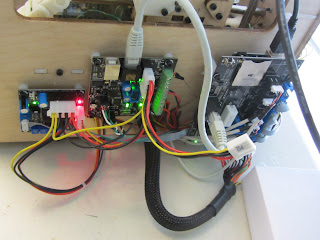 After doing this, I managed to pin down the fault in the temperature sense circuit to the cable itself. Flexing back and forth repeatedly during every print had broken one of the wires in such at way that they still made contact most of the time, but during prints would sometimes open and cause the temperature reading of 1024.  The Makerbot software isn't smart enough to stop printing when it sees this obvious error indication, but simply continues attempting to print as the bed cools off and the printed object breaks free from the bed. 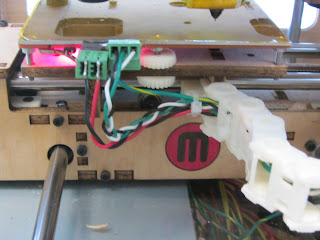 We didn't have any sufficiently flexible three-wire shielded cables on hand, so I simply braided together three pieces of fine wire to make up a new temperature cable assembly.

With the new cable assembly, I find that the printer still has trouble with large objects warping during the print, but smaller objects print fine, especially if printed on rafts.  I think that's as good as this printer is going to get for now.
Posted by ellindsey at 4:35 PM