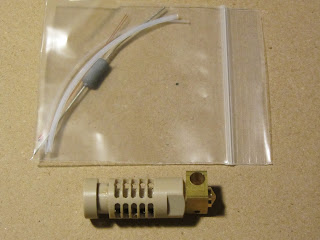 For my printer's hot end I chose a Mini J-head Mk II, custom-made by hotends.com.  The standard J-head is designed for 3mm filament.  I liked the simplicity and light weight of the J-head, but my printer is intended to use 1.75mm filament, so I custom-ordered a mini J-head instead.  I had been considering an Arcol.hu hot end at first - liked the idea of an all-steel extruder - or possibly a Budaschnozzle, but the Rostock design really calls for a head that's as lightweigt as practical to make full use of the platform.  I won't be able to print the more challenging materials like teflon with this nozzle, but that's not really my aim anyway.

The J-head, like most hot ends, seems to be designed to mount into a slot in a wooden base plate.  Presumably the wood helps insulate the hot end from the plastic structure around it, and is itself sufficiently temperature-resistant to not be damaged by the hot end.  I used a bit of scrap leftover from the Makerbot, drilled and sanded into a mounting plate for the hot end. 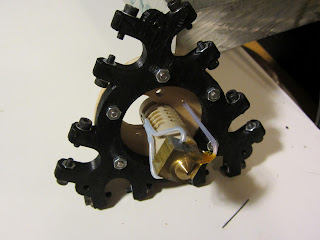 Here you can also see the heater resistor held in place with fire putty and the thermistor taped into the other side of the block. 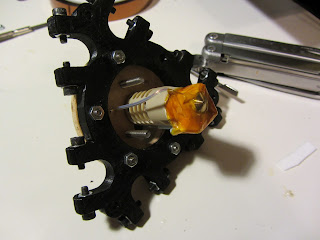 Here I've wrapped insulating wool and Kapton tape around the heater block.  This should make it a bit easier for the heater resistor to keep the hot end at the desired temperature.  I'm not completely sure this is necessary, but it seems to be good practice.

On the triangular black platform, which is normally connected to the six drive rods on the Rostock design, there are three mounting holes at the corner.  These were originally intended for adjustable screws which pressed the three lower end limit switches during the homing procedure.  The latest version of the Rostock software eliminates the need for the bottom end limit switches, so these holes aren't needed for anything.  On the Makerbot, it's hard to see the hot end nozzle when the print head is all the way down against the print bed, as the huge platform which supports the hot end blocks the light.  I'll be putting LEDs in these three holes to illuminate the hot end, to make it easier to align the head in the center of the print bed. 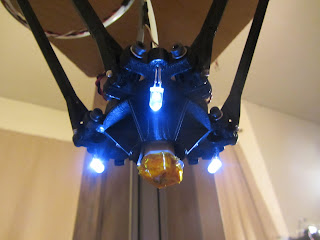 Here you can see the print head installed in the printer, with the three LEDs arranged around the hot end.  You can also see a piece of ducting I printed to go around the J-head.  The hot end is designed to have a continuous airflow across the midsection at all times.  Ideally you want the transition from ambient temperature to plastic-melting heat to be confined to a small area of the hot end barrel.  The transition region has cooling fins machined in it, and a constant airflow is recommended to keep the upper part of the hot end from getting too hot.  The original Rostock printer had a large fan placed next to the printer to blow air through the entire print volume.  I wanted this printer to be stand-alone, and ideally would like to eventually completely enclose it, so that wasn't an option.

There's not much room on the print head to mount a fan, and it's important to keep the weight of the print head as low as practical.  I used three miniature fans - 20mm square - and printed a structure to hold them on the upper part of the print head.  Channels inside the plastic support direct the air downwards, around the J-head, and out onto the print surface. 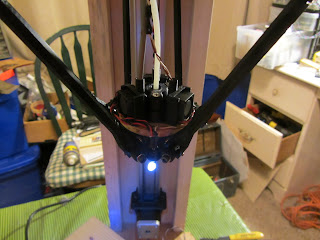 The fan support structure also holds the Bowden cable clamp and has channels for the hot end heater resistor and thermistor wires.  Power to the fans and LEDs is from the 5V supply lines on the PC power supply I was using for the printer.

I was using an old 350W power supply recycled out of my wife's old PC (She has since moved onto a machine requiring a much larger power supply), using the 12V feed to power the RAMPS board (and through it the motors and heaters) and the 5V feed to power the LEDs and fans.  I knew that PC power supplies typically required a minimum load on the 5V line to be stable, which I thought the fans and LEDs would provide.  What I didn't realize was that cheaper supplies like the one I was using had some shared components in the 5V and 12V switching regulators.  The voltage regulator circuit was designed with the assumption that the load on the 5V and 12V lines would increase roughly proportional to each other, as would typically happen in a computer.  A massive imbalance between the 12V and 5V loads severely stresses the switching regulator.

I had some suspicion of the problem beforehand, though I thought the LEDs and fans would be enough of a load, but I wasn't expecting catastrophic failure.  This type of power supply is supposed to shut off when it detects an improper load.  Instead, something inside blew up and arced over for a few seconds, then the main fuse burned out.  I could probably repair the damage, but I've decided to do what I should have done in the first place, and buy a 12V 30A industrial supply designed specifically for this type of duty.  I'll have to add in a little 5V regulator for the fans and such, but that's no big deal.
Posted by ellindsey at 8:52 PM