The original plan for the printer frame was to use the Makerslide rail itself as the structure for the printer, with wooden plates for the top and bottom only.  As I was building up the drive axis as described in the previous post, I decided to go with a more robust frame that could support itself without the rail.  I didn't trust that I would be able to clamp to the ends of the Makerslide rails securely enough to build a frame that would be solid enough to not shake or deform during printing.

After remodeling our master bedroom closet, I had a pile of 3/4" wooden laminate boards left over.  These became the top and bottom frame plates.  Side of 1/4" plywood and 1" square wooden dowels connect the top and bottom plates and form the structural trays where the Makerslide rails will mount. 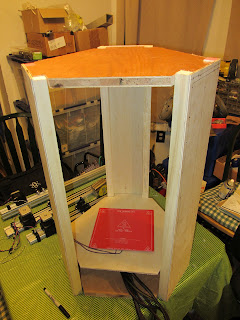 There's a 1/4" wooden plate attached to the motor mounts that supports the print bed.  The drive motors, RAMPS board, power supply, and other wiring and parts are all hidden beneath that and the lower structural plate.  Eventually I intend to enclose the sides of the lower compartment to hide all the wiring and other parts. 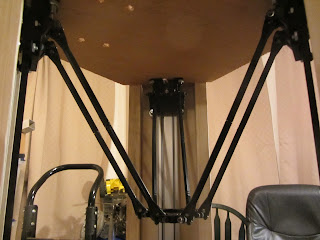 The printed structural blocks at the top ends of the Makerslide rails hold the idler pulley, and also anchor the top ends of the rails to the upper wooden plate.  These holes were carefully drilled to locate the three rails exactly 120 degrees opposed around the print volume.  The lower end of the rails are secured to the wooden corner plates with 5mm bolts.

At the moment I'm using printed connecting rods.  The Makerbot I'm using to print the parts doesn't have a print area large enough to print an entire rod in one piece, so I printed them in halves joined by a threaded rod in the center.  I may eventually replace these with carbon fiber rods with epoxied-on rod ends. 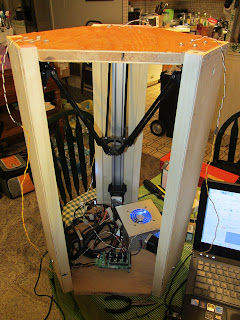 Preliminary electrical tests, with everything hooked up and powered.  Still a bit of a mess at the moment, nothing is mounted permanently in the electrical compartment and the upper endstop wires are just sort of draped over the outside of the frame.  It's still enough for me to be able to do the first test of moving the print head.

Looking good so far!  Next step, building up the print head.