Now that the printer is mostly functional, I've started working on the secondary structural parts, wiring and circuit boards and such.  These parts aren't needed for just printing, but will be needed if I want to be able to pick up and move the printer without parts falling out. 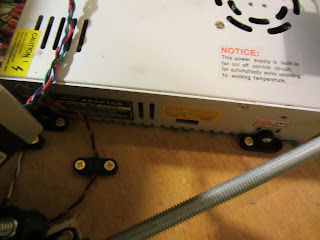 The power supply fits neatly in the triangle formed by the threaded rods connecting the lower ends of the Makerslide rails.  To lock it in place I've printed four small plastic feet that attach mounting holes on the sides of the power supply, and anchor it into the bottom plate with wood screws.  These seem to be strong enough hold the power supply in place and keep it from sliding around.  I wouldn't really trust them to hold the power supply in case if the printer was turned upside down, but I don't think that will be a problem.  I have also printed a hand full of small cable clamps, one of which you can see here holding the red and black twisted cable in place. 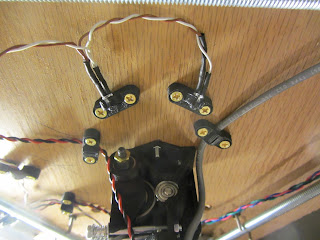 I have two ultrabright white LEDs mounted to the top plate, pointed at the pinch wheel interface in the extruder drive.  This helps me see if the filament tube is slipping out of the clamp, if the filament is stripped, and makes it easier to watch the rotation of the filament drive motor shaft to see if the motor is skipping.  Admittedly the LEDs aren't very bright compared to the room LEDs and it's hard to see them at all in this shot, but they do make it easier to see into the extruder mechanism.  Also, you can see several more cable clamps holding the wires to the print head here. 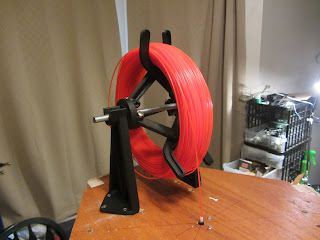 My experimental filament spool holder for those one-pound cable bundles that don't come on reels.  It collapseable to fit inside the filament bundle, then unfolds to grab the filament and hold it in place, then turns smoothly on bearings as the filament unspools into the printer.  At least, in theory.  In practice it's a pain to get aligned and put together, and I'm going to redesign it when I have a chance. 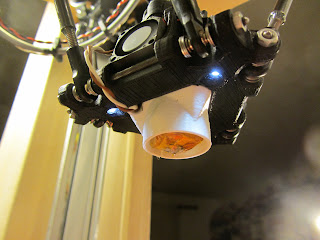 So far, my printer is quite bad at printing overhangs.  The filament stays molten for a long time after coming out of the nozzle, and if there isn't solid plastic underneath it tends to sag and deform all over.  Part of the problem is that there isn't much airflow at the end of the print head to cool and harden the plastic after it's extruded.  The three little 20mm fans don't make much airflow, and what they make isn't well-directed at the nozzle.  Here I'm experimenting with a shroud to try and channel air a bit better around the hot end.  It's helping some, but it's still pretty bad - can't print the cube gear parts without turning the speed way down. 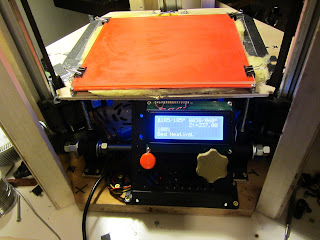 The biggest thing I've printed so far is the control console.  So far this holds a LCD interface, a click encoder (with a nifty printed control knob in gold), and a reset button (with a nifty button in bright red).  It also has spots for not-yet-mounted LEDs to indicate power to the hot and and bed, and for a SD card reader.

It's functional, but I'm not happy with the aesthetics.  The module is off-center, required in order to clear the corner do the power supply, and I had to cut off part of the plywood print bed support plate, which ruins the pleasing hexagonal symmetry of the design.  I'm probably going to redesign this to look better eventually, but I'm just happy to have it working for now. 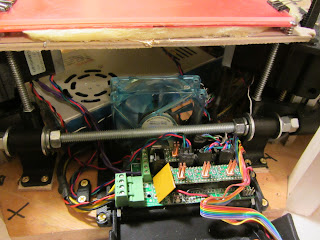 The best feature of the control console design - it's hinged open to flip open forwards, giving me full access to the RAMPS board without having to disassemble anything.  You can see the nifty new heat sinks I've installed on the stepper driver motors here, and the great big cooling fan to blow air directly on them.  With this setup I can check all the connectors, measure heat sink temperature, and adjust the stepper motor current limits while the printer is running.  It's been helpful with troubleshooting, especially with adjusting the extruder motor driver current to be just right.
Posted by ellindsey at 5:40 PM