First layer adhesion seems to be the key to getting a good print out of this printer.  If the first layer sticks evenly and consistently, and stays stuck during the print, the print usually comes out well.  If the corners detach, they tend to curl upwards, deforming the part, and in the worst case interfering with the movement of the print head.  When a delta printer skips a step, it doesn't just shift the layers above the skipped point sideways as it would in a normal printer.  A skipped step on a Rostock printer both shifts and rotates the layers above the skip, often resulting in the head crashing into the print again resulting in more skips and a completely ruined part.

My printer was not printing well.  The plastic was not wanting to stick to the bed unless I brought the hot end down to the point where it was nearly touching the bed, forcing the plastic to smear out and flatten against the glass.  I was also having real problems with strings trailing from the nozzle whenever the plastic stopped extruding for a moment, which would sometimes yank the plastic free from the bed as the print head completed a line and moved to another spot on the first layer.  This was a real problem when trying to print multiple small parts in an array, the printer would lay down the first layer of one part and then yank it off the bed as it went to print the next.

One tip I'd read on the message lists was to paint the borosilicate glass with a diluted mixture of PVA glue in water. 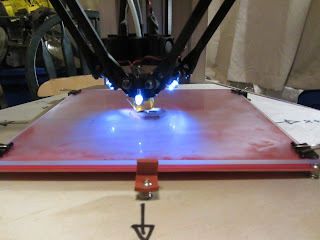 This almost worked too well - parts became very difficult to remove, to the point where I was worried about damaging the glass when trying to get the parts off.

I could adjust the effective print height and platform level, to try and get that magic first layer height where the parts would stick reliably but not be impossible to remove.  Here I came up against the real problem.  My printer was acting as if the print bed wasn't flat.  If I adjusted for proper print height in the center, the edges of any print larger than a few inches wide would peel right off the bed.  If I tried to adjust so that the edges adhered properly, the center would be smashed so far down against the bed that the filament drive would stall and strip the filament when it tried to print.  The distortion wasn't consistent, either, being worse in some directions than others along the bed.

I knew that my borosilicate glass bed wasn't bowed.  The problem was that the head itself wasn't staying level as it moved across the bed.  I was also seeing some unusual dimensional inaccuracies, where parts were unevenly larger or smaller than they were supposed to be in different directions.

As I had been building the printer, I had been designing an updated set of parts with various improvements.  I had also been working on an alternate frame design, using threaded rods to connect the three rails in a way where it would be possible to precisely adjust the position of the rails relative to each other.

With my printer working just barely well enough, I printed an all new set of structural parts. 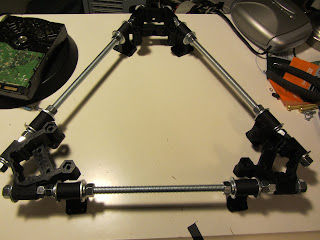 What had originally been simple blocks to anchor the motor mount screws to the rails became fairly complex structural blocks.  3/8 threaded rods anchor the three blocks to each other, and allowed me to very carefully adjust the positions of the rails to be exactly where they were supposed to be.  I also moved the bolts supporting the print bed from the motor mounts to the lower end mounts, so that adjusting the belt tension didn't also tilt the print bed.

Since the rails were no longer mounted straight to the wooden sides, I also printed feet which were slid onto the threaded rods and screwed into the printer base.  Even though the wooden frame was not redundant, I was still using it to mount secondary structural parts. 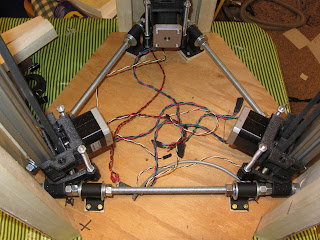 I have designed new motor mount blocks, but haven't printed them yet.  The old ones will still work for now.  I have slightly changed around the way the bolts connecting the motor mounts to the base blocks work, so that they can be adjusted from the top instead of the bottom now.  It's still fairly difficult to adjust the belt tension, I have to maneuver a small screwdriver alongside the belt in just the right way to reach the head of the tensioning screw buried inside the block, but it was nearly impossible to do so when the screws were adjusted from below. 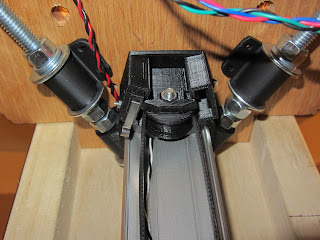 The top ends of the rails also had new blocks printed, connected by threaded rods to allow them to be carefully adjusted as well.  I have also designed pockets for the upper end travel limit switches, with channels inside for the various wires and cables to the top end of the printer.

In the process of this complete structural overhaul, I've also replaced the printed plastic connecting rods with rods made from RC truck ball ends joined by carbon fiber tubes. 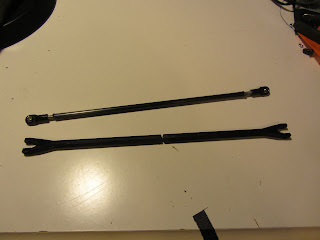 These are much lighter and more rigid than the plastic ones.  The rod ends are much smoother than the printed ones, but do have a little bit of looseness to them that translates to some free play in the head position. I'm not completely happy about that.

With the structural redesign I've moved the rails all in by an inch from their previous position.  They aren't anchored to the wooden side panels any more, anchored only at the tops and bottoms.  To keep the geometry of the delta platform the same, I have also redesigned the carriages and head. 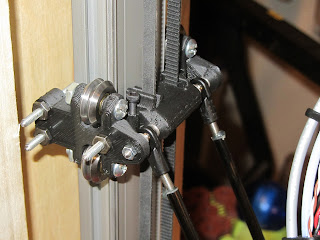 The new carriages are much smaller, yet lighter weight and more rigid than the old ones.  The new carriage is a three-part assembly.  Side plates hold the V-groove roller bearings, now supported on both sides of the bearing with a complete thru bolt.  The center section clamps to the timing belt and also holds the adjustable screw that presses the limit switch.  There are a total of four threaded rods through the assembly, including the annoyingly hard to find M3 threaded rod that goes through the two rod ends. 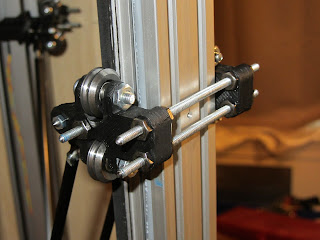 With the rails moved away from the side plates, the carriage structures can now wrap completely around the rails.  There's a lot of careful adjustment of the nuts required to get the pressure on the bearings just right, to the point where the carriages roll smoothly but are completely rigid against rotation or sideways motion. 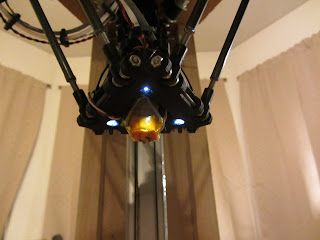 I've redesigned the head too, moving the rod ends a bit closer to the enter, but also massively simplifying the structure, reducing the number of parts and making it a lot easier to assemble and adjust the filament tube clamp. 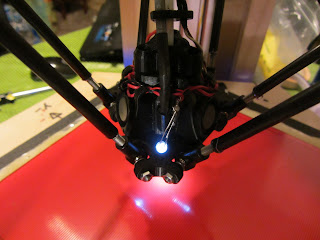 The three tiny cooling fans are now more directly aimed at the hot end barrel now, no longer having to have the airflow routed through holes in the wooden J-head mounting plate.  The LEDs are also now mounted directly in the head structure instead of dangling on their leads. 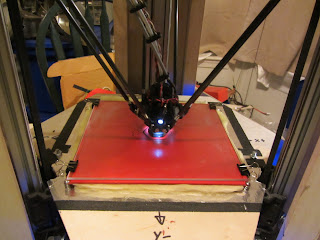 Finally, while I had everything taken apart, I added some insulation - a layer of foil and some strips of fiberglass under the heated PCB.  It seems to help the bed get to the right temperature and stay there, and probably helps keep the bed heat away from the electronics in the base.

With the new structural design, the movement if the head seems to be exactly where it should be.  I finally have proper adhesion of the print over the entire area of the bed that the nozzle can reach, and object dimensions seem to be correct.  Still to do - proper mounting of the power supply and RAMPS board, and some way to support the filament reel.

Posted by ellindsey at 1:30 PM