When building our Makerbot ThingOMatic, I was surprised by how little thought was given to cable management.  After carefully detailing the mechanical assembly, the instructions for wiring the machine are little more than a hookup diagram and some vague advice on taping the wires together to keep them neat.  There seems to have been little to no thought given to how to run the wires to the moving parts of the machine.  Most of the wires can be run along the inside corners of the machine and merely given enough slack to let the moving parts move freely.  The real problem is the build platform cable. 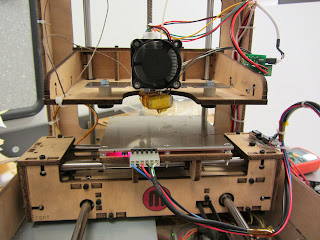 It's unsurprising that the HBP connector is one of the most common parts to fail on these machines, and the Thingiverse has countless files for strain reliefs and cable clips and management systems.

My first attempt to keep this cable out of trouble was to simply zip-tie it to the mounting for the Y axis endstop switch, and then try to encourage it to coil in loops off to the side of the platform, as shown above.  This really wasn't satisfactory, the cable was still scraping on the Y axis belt, and tended to get caught when the platform was all the way at the front of its travel.  Getting pinched didn't just risk damaging the cable, it interfered with the movement of the platform, which was a problem as some of the parts I needed to print nearly filled the entire print volume.

A cable guide downloaded from the Thingiverse helped to some degree. 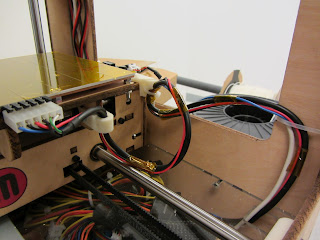 While not a complete solution, this at least kept some strain off the HBP connector.  I also began experimenting with designing a piece to anchor the build platform cable to the side of the Y axis.  My first few attempts didn't work very well - while they were keeping the cable bundle mostly out of the way, I was still losing some travel on the build surface due to the cable getting in the way of the platform's movement near the edges of the print envelope.  This solution worked well enough for printing small parts, but I needed to come up with something better to get the full use out of the machine.

We use industrial pick and place machines for circuit board assembly at the office.  While helping to maintain them, I had noticed that they used a cable chain system to manage the wire bundles to the moving gantries.  I decided to try and build something similar, as much to see if the ThingOMatic could print well enough to make that kind of complex moving part as to try and fix the HBP cable issues.

The result is this. 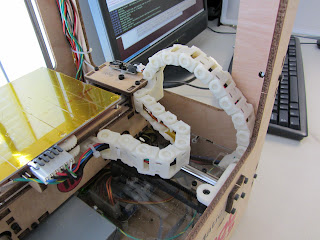 Admittedly, it's a bit of overkill for what it needs to do.  It's also not at all how cable chain is normally used - the chain should really be lying flat in a channel and bending with a constant radius when the gantry moves across it, not hanging free in space like this.  This works well enough for what I needed here anyway.  The chain constrains the cable to a single plane of movement, keeping the cable in front of the build platform from rubbing against the stationary parts below, and keeping the cable off to the side from getting pinched between the corner of the build platform and the frame of the machine.

Since I installed this modification (and those mentioned in the previous posts) the machine is working well enough to sit in a back room printing objects unattended for hours.  The cable chain has held up remarkably well, considering that the moving parts are just irregular plastic surfaces rubbing against each other.  I have yet to see any sign of the HBP connector failing, but I expect it will eventually, as even with the strain relief the connector is being operated beyond its rated maximum current and temperature.
Posted by ellindsey at 3:21 PM