Servos for a cheap walker

This robot has always been built on a limited budget.  The original used entirely leftover parts, and even when I started buying parts specifically for the walker I tried to keep the budget down.  I can't afford to use the servos that are made specifically for robotics use, so I have learned to work with common hobby servos.

For a while, I used the Hitec HS-5645MG servos.  These were ultimately disappointing - the gearbox was not robust enough, with the second largest gear being particularly prone to failure.  I tried using the notoriously cheap HX-12K, which is actually a relabeled TowerPro MG995 servos.  Those had more robust gears, but terrible position control and motors that rapidly burned out under load.  I built up some hybrid servos using the motors and electronics from the HS-5645MG and the gearboxes from the HX-12K servos.  Those worked well for a while, until the HX-12K cases simply disintegrated from the load.

As I was rebuilding the robot this year, I looked at options for replacing all the servos.  I considered the Dynamixel AX-12A, but using it would require major structural redesign, and I was concerned with how much torque it could actual produce.  I eventually bough eight of the new TowerPro MG996R servos, the replacement for the discontinued MG995.  I knew they were cheap junk, and resigned myself to replacing them after every hour or so of run-time and coming back from GenCon with a completely broken robot.

I was very surprised with how much better the MG996 were than the HX-12K.  It's still a cheap $12 hobby servo, but they seem to have redesigned every common fault or failure point in it.  The biggest surprise was this: 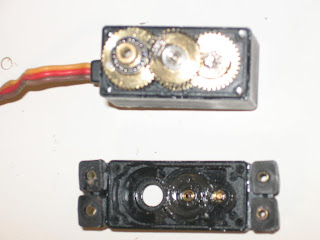 The MG995 servos consistently failed as the central gearbox shaft gouged out its retaining hole, causing the gears to shift out of place and jam.  Seven of the eight MG996 servos I bought had brass bushing inserts in the case where the two smaller shafts are held.  The eighth still had the old plastic bushings.  There was no indication on the outside of the servo as to which ones had the brass inserts and which didn't, so it may be a matter of luck whether servos you buy have these or not.

The MG996 servos also have a completely redesigned controller board, internal wiring secured with dabs of glue, and generally better quality of construction compared to the AX-12A/MG995.

I ran the robot for the entire GenCon weekend, putting an estimated two hours of run time on the servos.  The only servo to have any problem was the one which lacked brass inserts.  That servo is starting to show signs of classic servo case degeneration.  The rest of them are still working smoothly.

Now these are still cheap $12 servos, with all the limitations you'd expect:
I wouldn't use these on a biped, or any robot where balance or precision is important.  I wouldn't use them on a helicopter or airplane, or any vehicle where a momentary loss of control can mean disaster.  I wouldn't use them in any competition robot.  But for a cheap, just-for-fun quad walker, these are pretty good servos.
Posted by ellindsey at 3:13 PM