Gencon - the wonderful gaming convention my wife and I attend every year - is less than two weeks away.   As usual, all thoughts of moderation fled when I downloaded the event schedule, and I have signed up for at least 8 hours of events every day of the convention.  On top of that, there's a motorcycle rally in the city the same weekend, plus a concert or two and some other events going on.  Between all that and the 40,000+ gamers at the convention, I expect it to be nearly impossible to get into any of the city restaurants for food without a multi-hour wait - which I won't have the time for.

Sure, there's always the Indy Convention Center food court, but the food from there is terrible, overpriced, and rumor has it there was some nasty food poisoning going around last year.

My wife taught me the habit of preparing non-perishable food before conventions and long trips.  She's been making jerky and fruit leather for some years.  I've learned to make a sort of homemade snack bar, useful for those marathon gaming sessions when I won't be able to get out for real food.

This year, I've made three batches of snack bars:  a coconut-pineapple batch, an experimental chocolate-chip batch, and a kiwi-strawberry batch.  The recipe starts out essentially the same for all three.

The recipe is made up of three main parts.  First is an oat-based dry mixture that's toasted in the oven before mixing with the other parts.  The second part is a wet sugar and honey based glue material that needs to be heated and melted before mixing.  The third part is dried fruit or similar non-cooked material added into the mix at the last step.  The exact recipe of each part can be varied to taste, so long as the overall ratios are kept about the same.

Timing is important, as you want to mix the three parts and press them into the final form while the dry mixture and the glue are both still hot, as they will solidify and become unworkable as they cool.  You will want to have all your ingredients measured out and ready before starting to mix anything.

We start by preparing the dry mixture.  I use a large glass casserole dish to mix the dry ingredients. 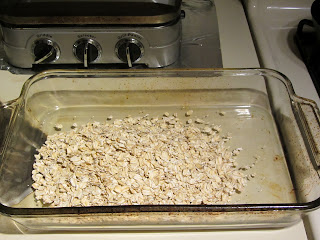 First, two cups of Old Fashioned Quaker Oats, to make up the bulk of the bars. 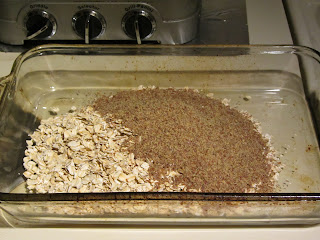 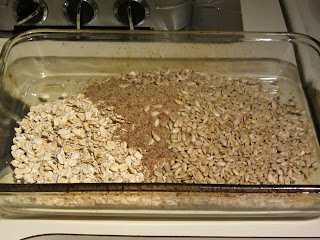 Then add three-quarters of a cup of shelled, unsalted sunflower seeds. 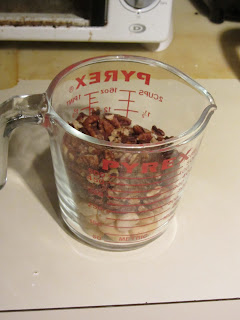 Now we need about a cup of finely chopped nuts.  You can buy chopped nuts, or you can get whole shelled nuts and crush them yourself.  For the first batch of bars (coconut-pineapple) I used a package of macadamia nuts, which are soft and quite easy to smash, along with some walnuts since I didn't quite have a cup of macadamias. 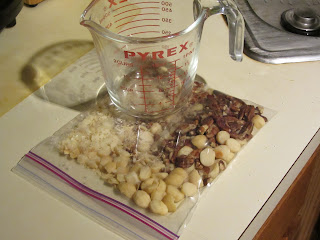 To crush them, put the nuts in a plastic ziplock bag, then carefully whack them repeatedly with a measuring cup or other heavy blunt object.  You can also use a fancy nut chopper or wooden mallet to do this. 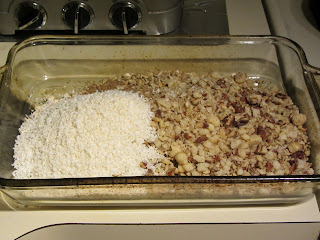 Finally, for the first batch of bars (pineapple-coconut), I added three-quarters of a cup of dry shredded coconut to the mix.  The other two batches didn't get anything else added at this step. 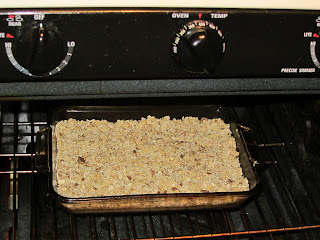 Now stir the ingredients in the casserole dish, mixing them evenly.  Heat your oven to 400 degrees and put the casserole dish in the oven.  Set a timer for 12 minutes, and then while the dry mixture is roasting you can prepare the second part of the recipe.

Put a medium-sized saucepan on the stove over medium heat. 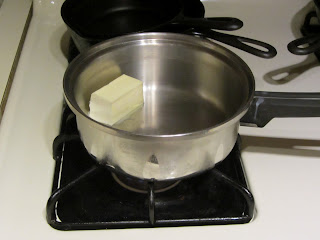 Melt 4 ounces - half a stick - of unsalted butter (or you can use salted, but then reduce the amount of salt added later) in the saucepan.  Be careful not to burn the butter, you want to just melt it gently. 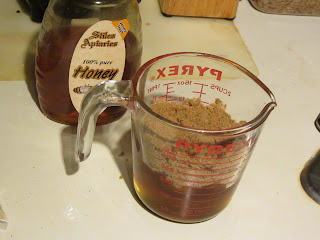 For the basic recipe, measure out two-thirds of a cup of brown sugar, and two-thirds of a cup of honey.  You can optionally replace some of the honey with any similar sweet syrupy material.  Maple syrup works well.  You can use molasses, but it has a strong flavor so use sparingly.  Chocolate syrup can also be used, as can peanut butter, if you want to add those flavors to the bars. 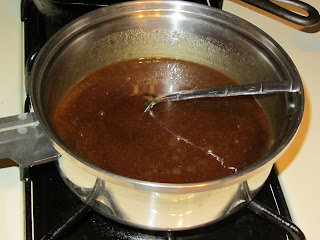 Add the sugar and honey to the melted butter, and stir well.  While stirring add half a teaspoon of salt and two teaspoons of vanilla extract.

While the glue material is simmering, you should periodically open the oven and stir the roasting dry mixture with a heat-resistant spatula to make sure it cooks evenly and doesn't burn.

While the dry mixture is roasting and the glue is simmering (don't forget to stir both periodically!) prepare your dried fruit.  This part is where you can experiment the most with varying the recipe in order to give each batch a different flavor.

For the first batch, I bought a package of dried pineapple.  Dried pineapple comes in two different basic types - there's the heavily sugared stuff that looks like chunks of golden jelly, and the natural stuff that's flat and stringy.  So far I've only used the first type for making these bars, although it should work just as well with either.

To mix evenly with the other ingredients, you want the dried fruit to be finely chopped. 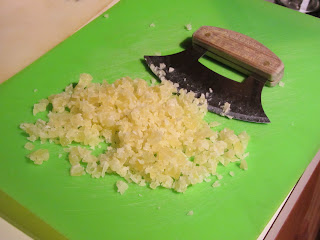 My trusty ulu works great for this.


Nearly any kind of dried fruit should be usable in this step.  In theory, you could also use chocolate chips or small candies if you're making a dessert bar.


Part 4: Mixing it all together.

Once the dry mixture has been toasting for 12 minutes, the glue is melted and ready, and the fruit is chopped, it's time to mix everything.  You'll want to do this quickly, getting the materials mixed while hot before they start to set up.

Take the dry mixture out of the oven, and transfer to a large mixing bowl.  Do this carefully, as the material will still be quite hot.  Then pour the heated glue into the bowl, and start stirring.  Add in the dried fruit or other ingredients.  Mix well, making sure to get all the oats and such fully wetted with the glue. 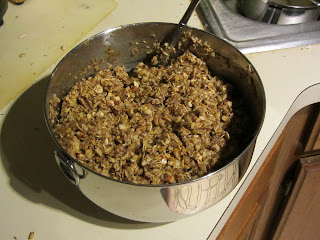 You can turn the oven off at this stage, you won't need it anymore.

Once the mixture is fully blended, turn back to the still-hot casserole pan you roasted the dry mix in.  Clean out any remaining bits of oats or whatever, and then line the pan with wax paper.  Transfer the still-hot mixture from the mixing bowl into the casserole pan, and spread it evenly.  Then take a second piece of wax paper, and spread it over the top of the mixture.  Press down on the wax paper.  You want to compress the mixture into an even layer and press out any air remaining between the grains.

After the snack bar mixture has cooled and hardened, remove it from fridge.  Flip the pan upside-down over a cutting board, and pull down on the wax paper until the mass comes loose.  Peel off the upper wax paper sheet. 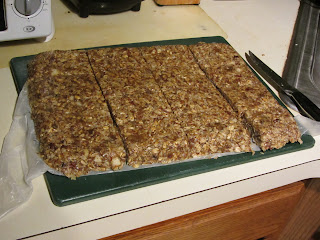 Now, with a sharp knife, cut the snack bar mix into 16 (or however many you desire) bars.

You can wrap or bag these individually and store them in the fridge or freezer.  They should keep for quite some time.  I like to vacuum-bag them and put them in the freezer, thawing them out only right before the convention. 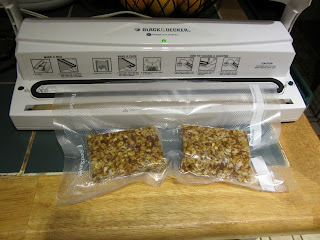 The Black & Decker food saver took some time to learn how to use reliably, and doesn't work well for all types of foods.  I have managed to get it to bag and seal these bars consistently now.


The coconut-pineapple bars were a recipe I'd made before, and one I knew would work well.  For the second batch, I decided to try a more dessert-type recipe.  I substituted a bit of chocolate syrup and molasses for some of the honey, and used chocolate chips instead of dried fruit.  I also used chopped hazelnuts and pecans in the dried mix instead of macadamias. 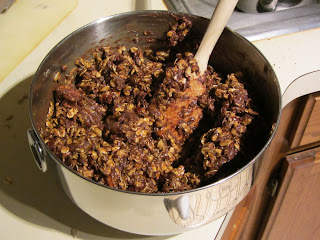 The chocolate chips melted the instant they hit the other still-hot ingredients, so rather than the effect of having chocolate chips embedded in the oat mixture I ended up with a homogenous chocolate-flavored bar.  It still seems to have come out reasonably well.


For the third batch, I decided to make my own dried fruit, using our dehydrator.  Ideally, this would have started with a trip to one of the local pick-your-own farms to gather ingredients by hand.  Sadly, the heat and drought we've been having this year mean none of the local places had a decent crop.  I had a hard enough time even finding a decent selection at the supermarkets. 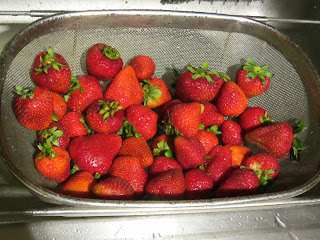 After throwing out the spoiled ones, I have enough strawberries for a third batch of bars. 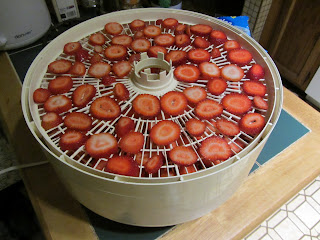 The tops are cut off, and the rest are sliced into pieces about an eighth to a quarter inch thick.  These go into my wife's food dehydrator, set to low and left to run overnight.  You want to make sure they get fully dry to the point of being crispy - any moisture will make them spoil faster. 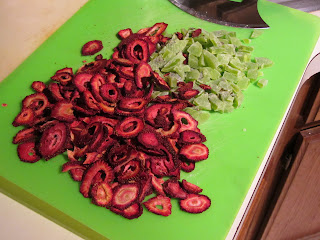 I combined the crispy dried strawberry flakes with some dried kiwi fruit I bought at a store.  I had originally bought the dried kiwis for snacking, but didn't like them much after trying them.  I figured to try them in this recipe.  Note that like the pineapple chunks, they need to be chopped further to mix evenly. 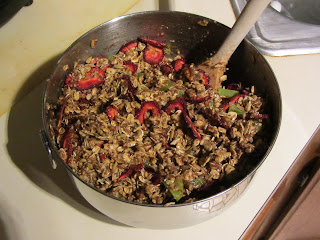 For the dry mix, I omit the dried shredded coconut, and used chopped walnuts for the nut ingredient.  In the glue, I substituted a little Grade B maple syrup (darker, with a stronger flavor) for some of the honey. 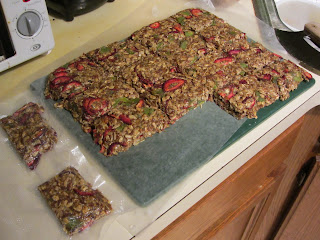 This batch came out beautifully.  Very sweet, with strong kiwi-strawberry flavors, and visually is very distinct with the red and green of the dried fruit visible in each bar.  I'm calling this a success.

With these - and the jerky and fruit leathers my wife will be making next week - I should be set for the convention even if I never manage to get out for a real sit-down meal for the entire weekend.