The little walking robot is getting a rebuild in preparation for GenCon 2012 - only days away as I write this.  I haven't actually changed much on the robot itself.  It worked well at last year's convention, so the main changes I made to it were to replace broken parts.  The big change I've made this year is completely rebuilding the transmitter.

Last year's transmitter was built around a FunnelIO board.  This is an Arduino clone with a socket for a XBee radio module and a USB-powered LiPoly battery charger on the board.  This was nearly everything needed for the transmitter function on one board, and it worked well for that version of the transmitter.  What I didn't like about the FunnelIO was the size.  It was too large to fit cleanly in the transmitter cases I built, sticking out one side awkwardly.  It was also awkward to program.  The USB port on the FunnelIO was only usable for battery charging.  To program the controller, I needed to remove the XBee module and plug in a FTDI serial converter with a handmade adapter cable.

The redesign started with Sparkfun's Free Day 2012, back in January.  The previous two years I'd been unable to win anything through it.  This year I was persistent and lucky, and managed to get among other parts three parts for a new robot controller:  an Arduino Pro Mini, an Xbee breakout board, and a Li-poly battery charger.  These three parts, along with the Xbee module I already had, would make the core of a new controller. 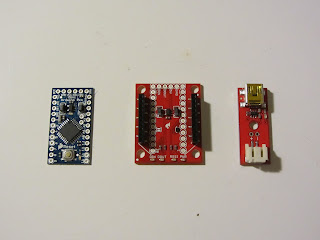 One goal I had for the new controller was to be able to program it without disassembling it, through the same USB port used to charge the controller battery.  This would be challenging, both mechanically and electrically.  I had a FTDI UBS-to-serial converter board I'd been using for programming in the past, but it had the wrong connector type, a type A (computer side) plug, rather than the mini-B I'd like to use.  The battery charger board had a mini-B connector, but no easy access to the data pins.  I ended up removing the type A connector from the FTDI board, then  very carefully soldering tiny wire-wrapping wires onto the mini-B connector on the battery charger, and running them to the pads where the connector on the USB-to-serial converter board had been.

Now I had a single port that would simultaneously connect both the battery charger and the USB-to-serial converter.  Now the challenge was the electrical integration.  The Arduino board only has a single serial port which is used for both programming and to transmit data to the XBee module. I needed to be able to program the board through this port while it was connected to my laptop, and then have it work normally as a transmitter, the two functions not interfering with each other, without having to plug or unplug modules.  I also needed to be able to plug the transmitter into my laptop with the Arduino and XBee powered off so I could just leave the battery to charge.

The three boards - the Arduino Pro Mini, the USB-to-serial converter, and the USB battery charger - are tightly sandwiched together.  I didn't get a good picture of that assembly, but it's hard to see what's going on anyway.  The following schematic shows the connections, as well as how the joysticks and mode select buttons are connected. 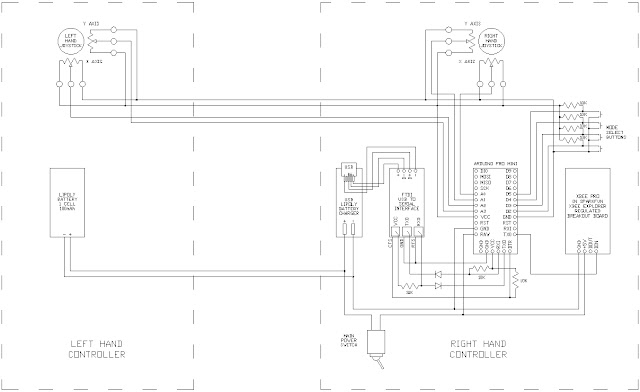 Many of the parts are recycled from the previous version of the controller.  The joysticks are the same old RC airplane controller sticks, and the mode select buttons are the same pushbuttons on a PCB assembly.  I'm also still using the same grossly over-powered 1000mAh lipoly battery.

Since the start of this year I've had access to a 3D printer at work.  I wasn't initially confident enough in the strength of the printed parts to use them for the robot, but I decided to see if I could make a new transmitter housing, something to replace the old plywood frame I'd been using.  The big advantage of the 3Dprinted housing was the ability to make it in any arbitrary shape.  I decided to keep the overall outline the same as I had with the plywood housing, but was able to design pockets and channels internally to hold all the components and wires. 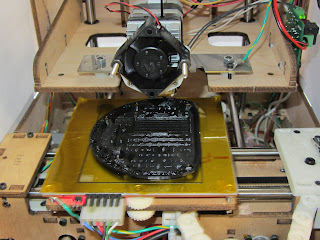 The basic form would be the same as the last one, with right-hand and left-hand controllers connected by a cable.  Each controller would be made up of two pieces, a larger 'front' piece that held the joysticks and most of the components, and a mostly-flat 'rear' panel.  Here's one of the rear panels being printed.  These parts are big, near the maximum size that could fit on the Makerbot Thing-O-Matic build platform. 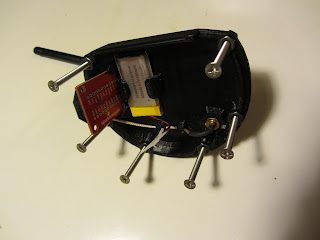 A test-fit of the rear panel of the right-hand controller.  The Xbee radio module fits into a slot, with a channel to route the antenna wire to the antenna connector set into the back.  I was also experimenting with a smaller battery, shown here, but ended up going with the larger battery I'd used in previous years instead. 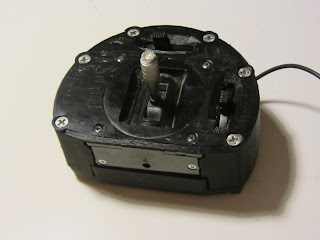 The completed left-hand controller!  The RC airplane joystick fits flush into the front-side housing.  You can see the to center adjust trims sticking out through the front face as well.  I ended up attaching guards around these to make it impossible to knock them out of position by accident. 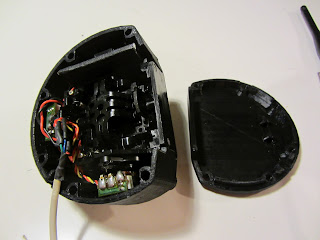 The left-hand controller, opened up.  The joystick assembly occupies nearly the entire interior.  There's just enough room for the battery, which is the black oblong object above the joystick. 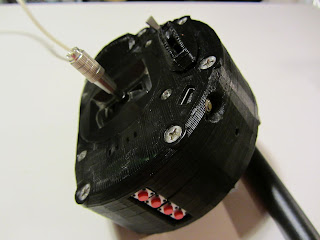 The right-hand controller has a bit more going on.  The four mode-control buttons are placed where I can easily press them with my fingers while working the joystick with my thumb.  The USB charging/programming port is visible, right above the Arduino reset button.  This side also has the radio transmitter and antenna, and the main power switch. 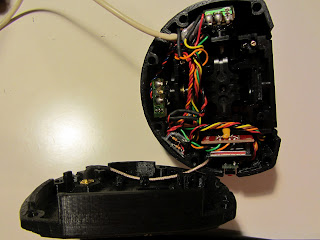 The right side controller opened up.  It's a bit hard to see what's going on - the modules are fairly tightly installed and obscured by wiring.  As with the left-hand controller, the joystick takes up most of the interior.  The Xbee radio module is at the bottom of the controller in this photo, and the Arduino/battery charger/serial converter assembly is just to the left of it. 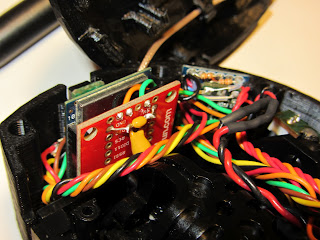 Closeup on the control boards.  XBee carrier is on the left, with the wiring bundle to the mode select buttons snaking around it.  The Tantalum capacitor soldered across the XBee power terminals seems to be vital, I couldn't keep a reliable radio link without it.  The barely-visible control board is to the right. 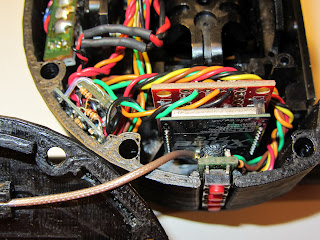 Viewed from the opposite angle.  You can see the mode select buttons to the right, and the controller module to the left.  Admittedly it's hard to see how they're connected in this shot. The schematic posted above should make it clear. 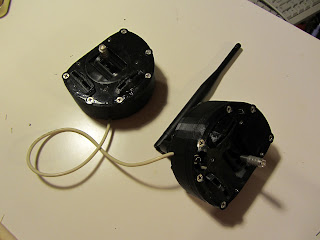 All buttoned up, and ready to go to the convention!

On the robot itself, the biggest change has been replacing some of the steel parts of all four legs with printed parts. 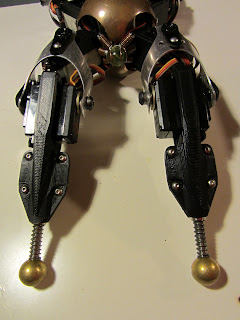 After building the transmitter case, and some other test parts, I was confident enough in the strength of the 3D-printed parts to use them for the leg structure.  They seem to be holding up so far.  We'll see if any break over the convention weekend.
Posted by ellindsey at 6:10 PM