Data recovery on an Amiga 2000

Earlier this year, I retrieved my wife's old Amiga 2000 and 4000T computers from storage and gave them a thorough cleaning and refurbishing, in preparation for eventually selling them. Those computers were in excellent shape and there wasn't much to do on them other than documenting their condition and swapping out the original batteries for modern lithium ones.
After I posted about that task, an old friend asked me if I could take a look at his old Amiga 2000 and see if I could recover some files off of it for him. This computer had been sitting in a basement for several decades, and was in unknown condition other than that it wouldn't boot up any more. There were various personal files on the machine, which my friend wanted to recover, and he was hoping I could at least restore the machine to working shape long enough to transfer them off.
I agreed to look at it, though I made no promises of results. 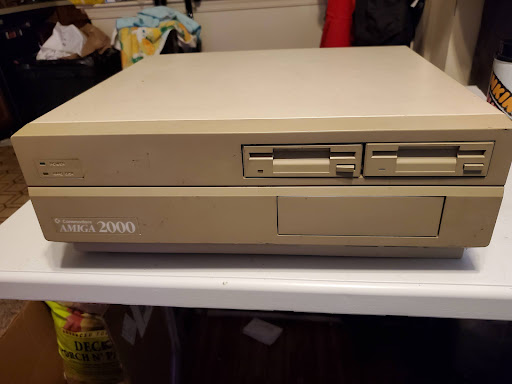 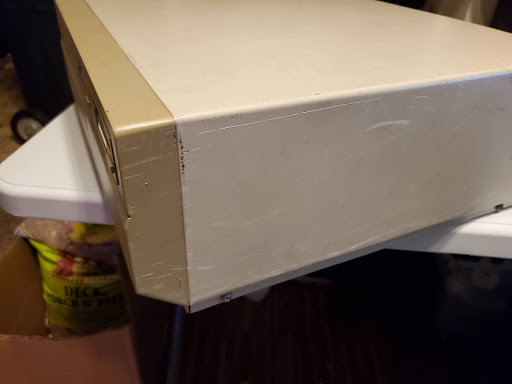 This machine was in worse shape than the ones I had previously worked on, with scratches and dents, and one of the floppy drives had a broken ejection button. There were some minor traces of corrosion around the ports as well.

Most importantly, when connected to a monitor and powered on, it showed a grey screen on the display and no other signs of life. 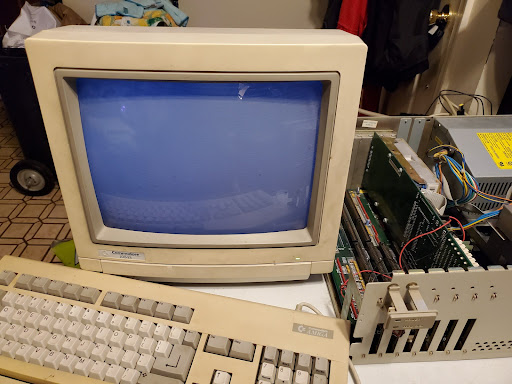 The lack of any life at all suggested damage to the motherboard. The most common culprit is leakage from the clock/calendar battery causing corrosion to the PCB and nearby components. My friend had already removed the original battery, but it was possible that it had caused some damage before he had.

I fully disassembled the machine, documenting and photographing everything as I did. There wasn't anything exotic installed in this machine, just a Great Valley Products combination hard disk and memory expansion card, and two floppy drives. The motherboard showed some corrosion around the battery, so I set that aside for cleaning and inspection. 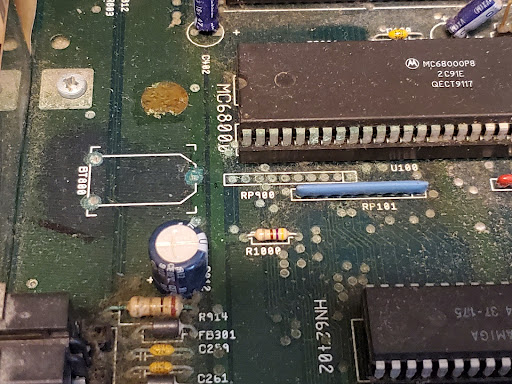 I couldn't find any damaged traces on the board, but the MC68000 CPU and its socket looked corroded. I pulled the CPU to inspect and clean it and its socket. While they were out I cleaned the entire area of the board near where the battery had been, getting rid of any traces of leakage from the batteries.

The CPU itself seemed fine after being cleaned, but the socket had obvious damage. Pin one had actually broken apart internally, corrosion causing it to crack right through, and was no longer making connection to the pin on the CPU. This would certainly explain why the machine wouldn't start up. 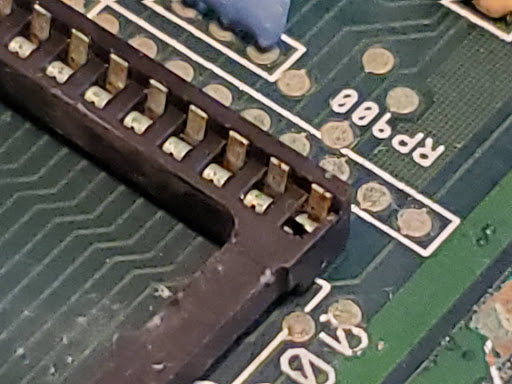 The proper thing to do here would be to desolder the old socket and replace it with a new one. I didn't have a replacement socket on hand, and was more interested in getting this machine for now than in any long-term restoration, so I went with the fast hack solution of soldering a wire directly from the CPU pin to a pad on the PCB nearby. 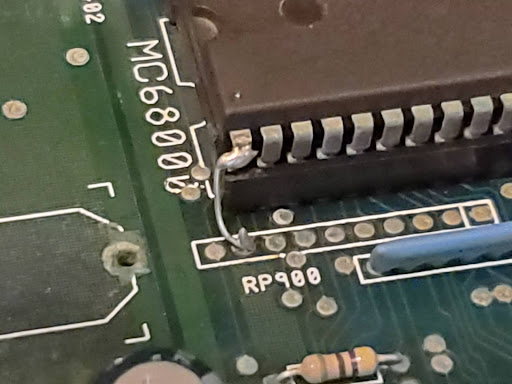 In the long term, this temporary fix should be removed and the socket replaced properly.

When the machine was reassembled and switched back on, instead of a grey screen, it actually booted up to the "looking for disk" screen, a definite improvement. 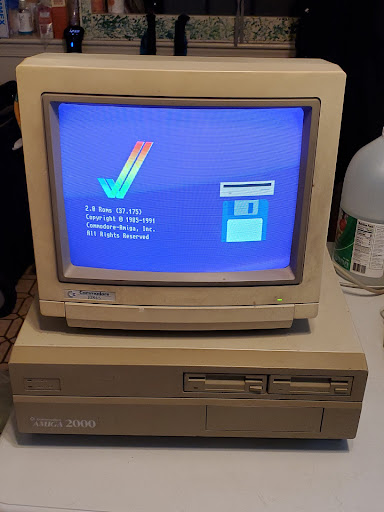 This computer had a hard disk and should have been booting off that, so there was obviously still something wrong. It would successfully start up if a workbench disk was inserted into the right side floppy disk, but not the left. The left side disk had a broken ejection button. 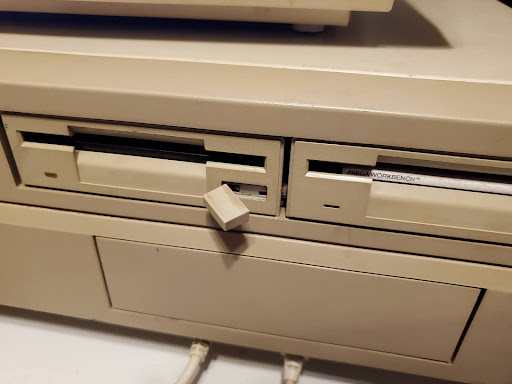 That shouldn't have prevented the disk from working, but there was obviously more wrong with the floppy drive than just that. I did a quick inspection and didn't seem anything wrong. It might just need a good cleaning. I only needed one drive for the data recovery task, so I set that aside for now.

The hard drive should have been starting up, and was not. I could hear that the drive was spinning, but the computer refused to acknowledge that it existed. I even tried swapping the drive onto one of the other Amigas to see if it was a problem with this machine, but the drive refused to respond.

With no other options, I decided to try opening up the drive. Really at this point I was pretty sure that the drive was dead, and this was just going to be a forensic dissection to see what had happened. 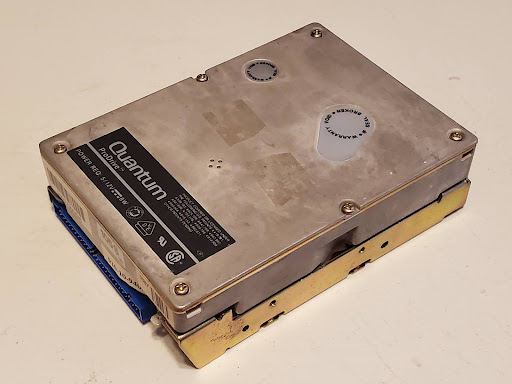 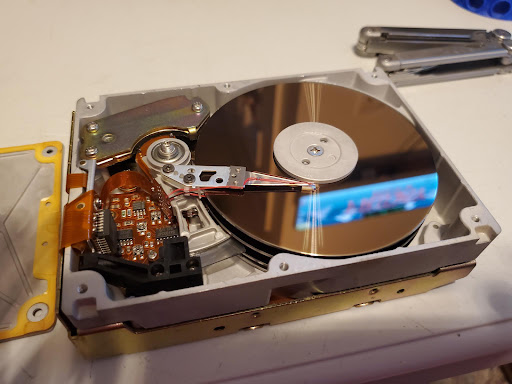 Opened up. Never do this with a drive you care about.

While doing some research into possible failure modes, I learned that the most common problem on these old early 90's Quantum drives was the bumpers that limit the travel of the head mechanism. These bumpers are made from a soft rubber, which after a few decades breaks down and turns into a horribly sticky tar-like substance. The head mechanism gets stuck in place and can't move, which causes the drive to fail its own initialization and refuse to even identify itself as a drive to the computer. 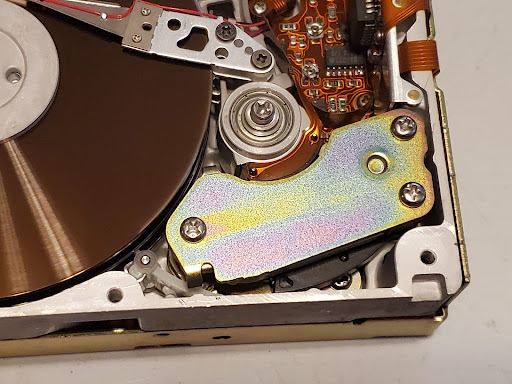 The part I needed to get at was sandwiched between two extremely strong magnets, with the movable voice coil located between them. I needed to remove the screws and pull the upper plate off, without touching the drive platters or allowing the magnet to come near them. I also needed to be careful of the bumpers, which had indeed turned into a vile tarry mess and couldn't be allowed to come into contact with any of the moving parts of the drive. 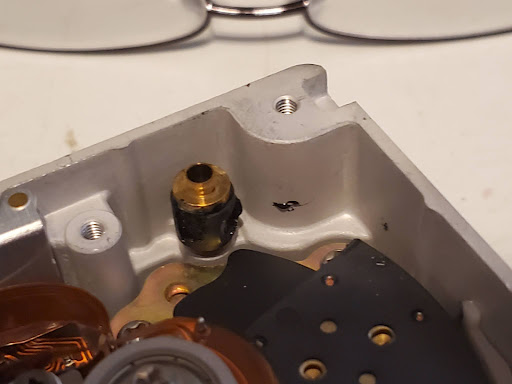 With some care, I managed to get the upper plate off. The head mechanism was stuck to it, and it took a little force to pull it free. 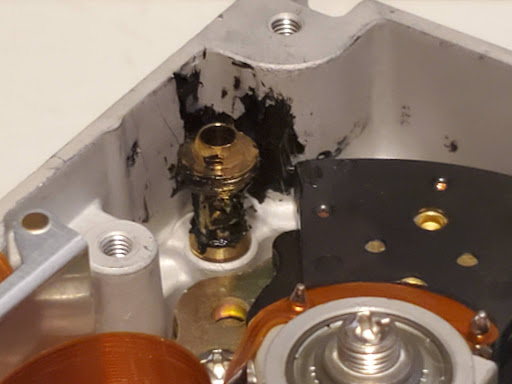 I cleaned the hideous glop off the mounting post. Some of it got onto the inner surface of the drive housing, but it doesn't really matter there as nothing touches that area.

Now that I'd removed the old bumpers, I needed to replace them. You can't just leave nothing there, the bumpers are needed to keep the drive head from crashing into the spindle or falling off the platters. I found some nylon spacers in my junk box that were about right size and fit them in place of the original rubber bumpers. 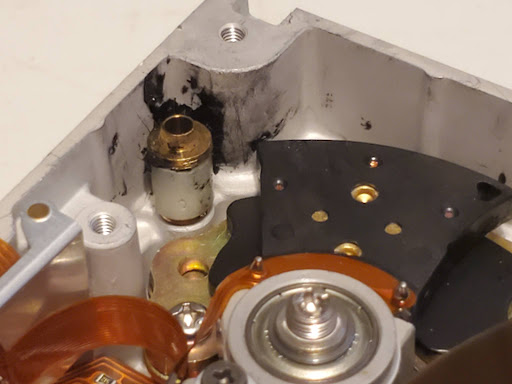 After making sure that the mechanism could move freely between its travel limits and wouldn't get stuck to either of the new bumpers, I very carefully reinstalled the upper magnet plate and then put the drive back together, hoping that I hadn't gotten too much dust on the platters in the process.

I put the drive back in the machine, put the machine all back together, hooked the monitor, mouse and keyboard back up, and powered everything on. Much to my surprise, the computer recognized the hard drive and started booting up.

It didn't get far before reporting a disk error. 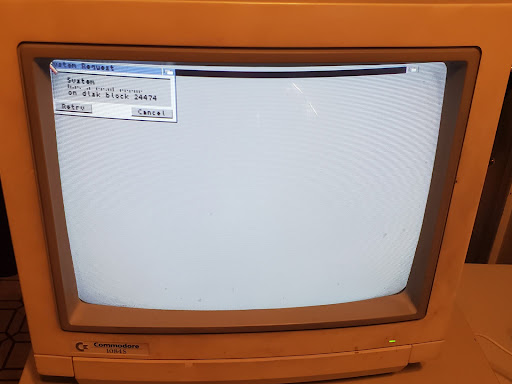 I clicked through that error, and about half a dozen more similar errors. Eventually, with much complaining, the machine made it to a desktop screen. 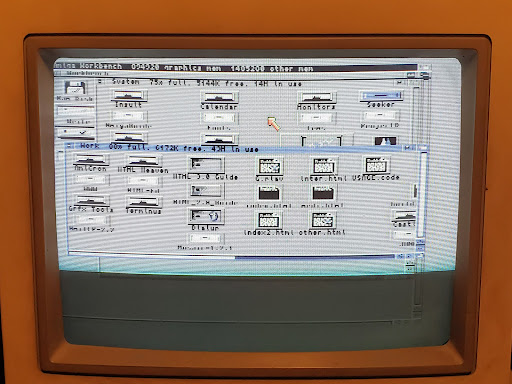 All of the files that my friend was looking for were here. Now I just needed to transfer them off the computer.

I had one working floppy drive, and a handful of blank floppies. I also had a spare 3.5 inch IDE floppy drive. I didn't have a computer that could talk to the floppy or use it to read Amiga formatted disks, but it turns out that there's a solution for that too. Robert Smith has provided the world with instructions on how to use an Arduino to connect an IDE floppy drive to a modern computer though a USB port, and software which will read Amiga formatted disks and save their contents into disk image files on a modern PC. I followed the instructions at https://amiga.robsmithdev.co.uk/ and soon had my own Amiga format disk reader setup working.

With an afternoon of swapping floppies back and forth, I managed to get all of the old personal files that my friend was looking for transferred onto my laptop. The last step was to set up an amiga emulator program that duplicated his old hardware setup, and load all of the disk images onto the hard drive of that emulator. I made sure that he could easily access all his old files on the emulator, and then just packaged the entire software setup up and sent it to him.

The Amiga itself is going to go up for sale, presumably for any collector who wants to put the work in to actually restore it. I spent a bit of time playing some old games on it, but I don't have the desire to keep it or put the work in for a proper restoration. I know there are people who are interested, so I'll be putting it up for sale on auction sites soon after posting this. 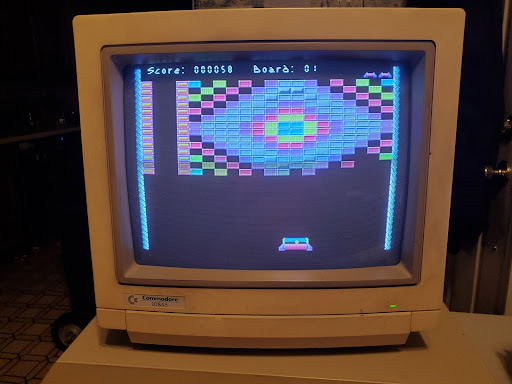 Posted by ellindsey at 2:02 PM