Our neighborhood never has a large number of trick-or-treaters, even on a normal year, but I do always make a point of having candy on hand for the dozen or so kids that we get. This year, I wasn't certain we would get any at all, and I wasn't sure I'd feel safe handing out candy face-to-face with them if any did come by. I had for a while been planning to just shut the outside lights off and lock the door, but decided, a few weeks before holiday, that I could hand out candy in a safe, no-contact way after all.

I saw how some people were setting up delivery tubes for safe remote candy delivery. I had a cardboard shipping tube on hand that I could use for that, but I realized that I could do better than just dropping candy in by hand. I designed a carousel mechanism based around a FIT0441 blushless gearmotor, which would have compartments for up to 10 loads of candy. 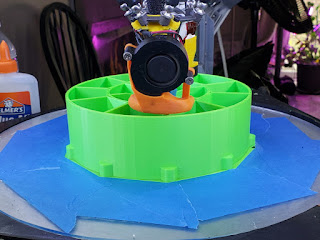 About a 28 hour long print on my printer, one of the largest single pieces I've ever printed. 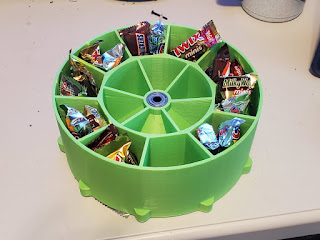 Room for 10 loads of candy, although one will always be empty due to being over the dispending hole.

A microswitch acts as a position sensor, telling the motor when to stop after rotating to release the next load of candy. The carousel mechanism was mounted at the top of the tube, so that candy would slide down the tube after being released. 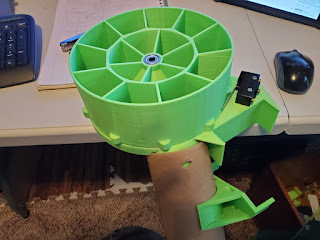 Quick assembly of the mechanism.

To control the system, I used some old Arduino Pro Mini clone boards left over from another project a few years back. I ran into a significant problem with these, as the power supplies on the board failed, and in once case literally exploded, as I tried to run them off the 12VDC power supply I had on hand. The Arduino Pro Mini has an on-board power regulator which is supposed to handle a 12VDC input, but every one of these boards failed when powered at 12V. This was especially surprising as I had powered these exact same boards off this exact power supply when I first bought them a few years ago. I can only assume that they somehow degraded while in storage, but I'm still baffled. Perhaps this is just a lesson that I should be using actual Arduino boards rather than cheap clones.

I eventually resorted to desoldering the failing power supplies from the boards, and using an external 5V regulator to power them instead. This worked with one of the three boards I had on hand, the other two seemed to be completely dead.

At this point, it was getting fairly late on the day before Halloween, after spending a full day on getting the Arduino board to work, so the remaining wiring is a bit of a mess. Driving the motors was easy since the FIT0441 has a built-in motor control circuit. It has one wire for direction, and another which is used as a PWM speed control line. There's also a feedback line indicating motor rotation, but I didn't end up doing anything with that signal. Position control came from a big old microswitch out of my junk box which would be pressed to stop the motor after rotating. 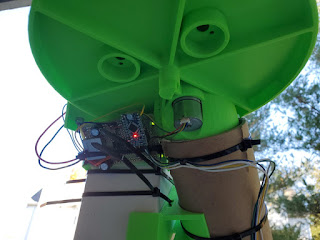 Somewhat messy wiring in the final assembly, but it worked. The motor is driving the carousel through an inside ring gear built into the underside of the carousel. I made spaces for three motors, but only one was needed.

I could at this point have made the device dispense candy with a button push, but I wanted it to be truly non-contact, not requiring either the visiting kids or myself to have to touch anything. I had on hand an IR emitter/detector assembly from a broken hands-free paper towel dispenser. This was fairly easy to hook up to the Arduino Mini. The IR receiver this module was using to sense reflected light was originally designed for TV remote control use, and was only sensitive to light pulsed at 38khz. Getting the Arduino to output a 38khz signal requires my directly writing to the timer 2 registers, as there doesn't seem to be any clean way that I could find through the Arduino libraries. Once I figured out how to do that, it was easy to get the proximity detector to sense when someone was holding their hands, or a bag or basket, under the end of the tube. 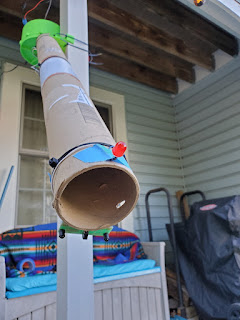 Downward-facing IR LEDs and sensor on the board at the bottom. Big red LED at top.

As a final touch, I added a blinking red LED to attract attention to the end of the tube. My wife drew up an instructional sign, and sacrificed one of her old pairs of tights to cover the tube and all the exposed wiring. 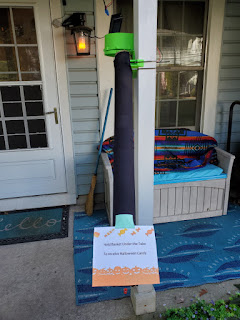 We ended up getting about half a dozen kids, in two groups. The dispenser worked well, and with some guidance from their parents and me calling out instructions from inside, all the kids were able to get candy from it. I did determine during testing that Twix bars would sometimes jam in the cartridges due to being just the right length to get caught diagonally, but once I pulled those out the mechanism worked well enough.

This was a fun project for Halloween, built entirely with parts I had on hand. I'm not sure if I'll bother with something like this again next year, though if I do I'll probably redesign it from scratch, as the rotating carousel mechanism for dispensing candy was really crude and could be made a lot more reliable.

Posted by ellindsey at 1:51 PM