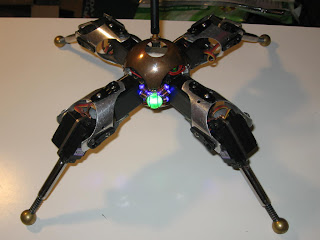 This robot started out as something fun to do with spare parts. I used to compete in robot combat competitions, starting with the original non-televised Robot Wars events in San Francisco, and then later BattleBots, as well as several other smaller events held around the country. I used to use cheap RC airplane radios to control the combat robots, and those radios always came with three or four cheap hobby servos, as well as a small battery for the servos and receivers. The servos were nearly useless for those robots, far too small and fragile, and after a few years I replaced the standard receiver and battery with a micro receiver and voltage regulator off the robot’s main batteries.

One slow weekend I took a receiver, battery, eight servos, and some silicone adhesive and scrap plastic, and built something that could limp around the workshop, slowly. It was fun enough for me to rebuild it a few times and tweak the design, eventually adding a microcontroller to automate the walking cycle. With that I ended up with something that worked well enough to show off to people. The main limitation was severely limited battery life. The little receiver battery I was using to power the robot, basically four rechargeable AA batteries, couldn’t handle running 8 servos under constant load for more than a few minutes. Switching to five heavy-duty sub-C sized cells, leftovers from combat robot battery packs, vastly increased the run time, and the additional voltage and current capacity made the robot much faster.

At this point the robot had passed beyond the point of begin something to do with leftover parts to where I was spending time and money specifically on it. I took the robot with me to one of the robot competitions, not as a competitor but simply to show off, had more fun with that than I’d had actually competing, and took home the ‘coolest robot’ award despite not actually being entered in the contest.

In 2004, my wife and I began attending GenCon. This was after the smaller local convention we had been attending (CastleCon) shut down - going from a 300-person local convention to a 30,000+ person national one. We’ve attended every year since. One early year - either 2005 or 2006, I’m not sure - I decided to bring the robot along, to show off to some friends. I had a lot of fun, not just with friends we were meeting but also walking the robot around the convention.

Since then the robot has been a fun way for me to show off my engineering skills, meet and entertain people at conventions and shows, and to experiment and learn with different ways of building it. Learning what breaks on the robot, fixing it, and then finding the next weak point has taught me a lot, that’s I’ve used at work and in other projects.

These were not taken by my, but by other people at the conventions, whose names I didn't get, but who kindly took videos of my robot and put them up on Youtube.