The electrical system of the robot is built up around a Pololu 8-channel Serial Servo Controller.  The SSC receives a serial signal from an XBee Pro radio modem, and drives all eight servos on the robot. 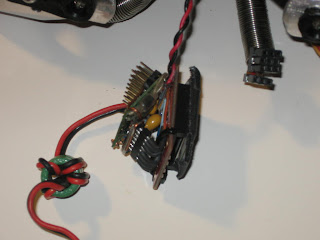 The XBee radio is mounted to a Sparkfun Xbee Explorer board.  This regulates the 5V from the Pololu board down to 3.3V, and provides a handful of useful status LEDs.  The whole thing is assembled in a rather inelegant dead-bug style.  I've also attached tantalum capacitors onto all the power supply outputs to make it a bit more tolerant of noise on the power supply rails. 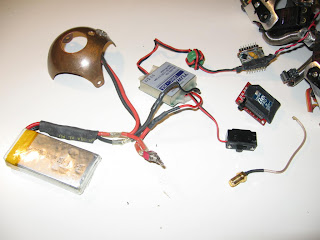 Power comes from a 2 cell, 1mAH LiPoly battery.  The battery is directly connected to a management board which disconnects it in case of shorts, overvoltage, or undervoltage conditions.  That keeps the robot from bursting into flames if I accidentally short the main battery connections.  There's a jack on the back of the shell for charging, and a power switch to switch power to the rest of the robot.

The battery provides about 8V when fully charged, which is too high for the servos which don't run long on more than 6V.  I use a Turnigy 15A ubec to drop this down to something the servos can handle.  There's an additional and rather large power switch hanging off the ubec.  I really should cut this off and solder the wires together, since it's really not needed.  I really didn't want to put a regulator on the robot for a long time, not confident that it could handle the current draw of eight servos running at once, but it's actually worked out quite well.

The green blob wrapped in wire is a ferrite which reduces the noise coming from the switching regulator.

The only other electrical component on the robot is the power and direction indicator.  This is made from a uranium-glass marble, surrounded by six ultrabright, ultraviolet LEDs.  The LEDS are all aimed inwards at the marble, the UV light from the LEDs making the marble fluoresce green.  The net effect is to make the marble seem to glow with its own internal light.  I can excuse this even with my 'no purely cosmetic components' rule.  It shows me that the robot is completely switched on, and unambiguously indicates which end of the robot is the front.  As the design is roughly radially symmetrical, this is important. 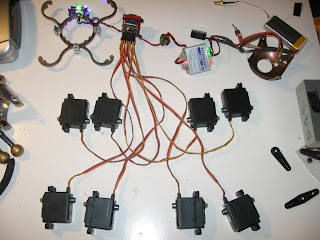 Here's a everything electrically complete, being bench-tested.  Now to assemble it.
Posted by ellindsey at 7:24 PM