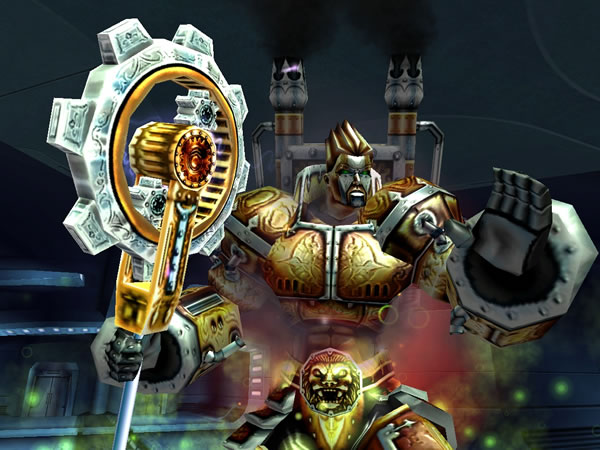 It's all a Nemesis plot

August 2019.  My wife is getting ready to go to DragonCon, mostly to meet up with friends that she knows from online games, including the recently resurrected MMORPG City of Heroes.  About two weeks before the convention, she tells me that she’s going to the steampunk-themed ball, where two of her friends are getting engaged. I decide to try and make a Nemesis Staff, a gear-shaped weapon from the steampunk themed Nemesis villain group from CoH.  I didn’t think it would be too hard, but what followed was one of the hardest and most rushed printing projects I’ve ever done.

In City of Heroes, Nemesis is one of the higher-level endgame villain groups, and Lord Nemesis’s signature weapon is the Nemesis Staff.  The prop I was building was not the full version wielded by Lord Nemesis, but the lesser version available as a temporary weapon for players to use.  Mostly because it was much easier for me to get screenshots of the readily available temporary weapon, rather than hunting down Lord Nemesis or one of his many duplicates.

I was ultimately going to have to work from screenshots for making the prop.  Extracting actual geometry files from City of Heroes is difficult. Object geometry isn’t stored in any easily accessible format.  The usual method to record scenes is with utility that runs on top of CoH and intercepts geometry data on the way to the graphics card, but that results in recording the entire scene, at which point I’d have to manually filter out just the nemesis staff geometry.  But even if I did that, I could already see that I’d have to redraw the staff from scratch anyway. The in-game prop is painfully low-polygon, big chunky triangles approximating a circular shape and gear teeth that were suggested by image mapping rather than being actually drawn in.  This game is about 15 years old, and the graphical models were quite crude, and would have looked terrible if I had simply printed them out as-is.

Instead, I decided that I was going to draw the Nemesis Staff from scratch, using the appearance of the item in the game as a rough guide, but ultimately redrawing the whole thing from scratch.  My goal was to try and intuit the concept that the artists who drew the game model were working from, and to come up with what it would have looked like if they’d had unlimited rendering resources to work with.

While peering at the screenshots and trying to figure out the design of the gear mechanism, I realized that there appeared to be a lot of subtle detailing on the part, especially on the outer ring.  In the texture map, there appeared to be suggestions of engraved and embossed details. I tried to reproduce these on the printed prop, although it was at times difficult to tell if what I was seeing was intentional detailing or image compression noise.  As mentioned previously, the source images were painfully low-resolution. 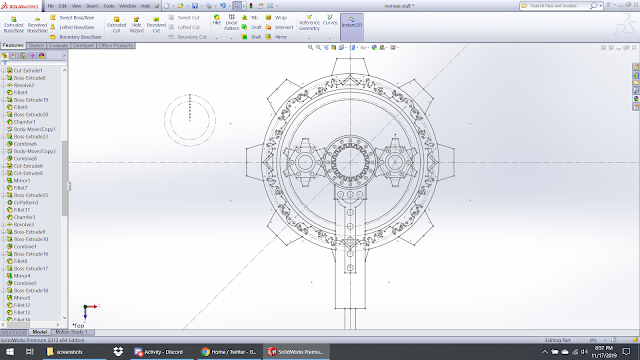 Recreating the fine detailing in Solidworks

In other places, the texture mapping had obvious rivet heads and other details, which I expanded into actual physical shapes, in places making them actual separate pieces so they could be different colors from the surrounding materials.

The outer ring was clearly intended to be circular, rather than the crude polygon of the game model, so I drew it as such.  The central hub was also clearly intended to be circular. The sun gears, on the other hand, had detailing that suggested that they were intended to be actual hexagons, with six well-defined gear teeth.  There were lines on the inside of the ring and outside of the hub suggesting gear teeth, but they didn’t mesh with the planetary gear in any meaningful way. I added actual working gear teeth to make the mechanism actually work as a planetary gear mechanism, with the outer gear rotating and the planet gears going around as they do in the game. 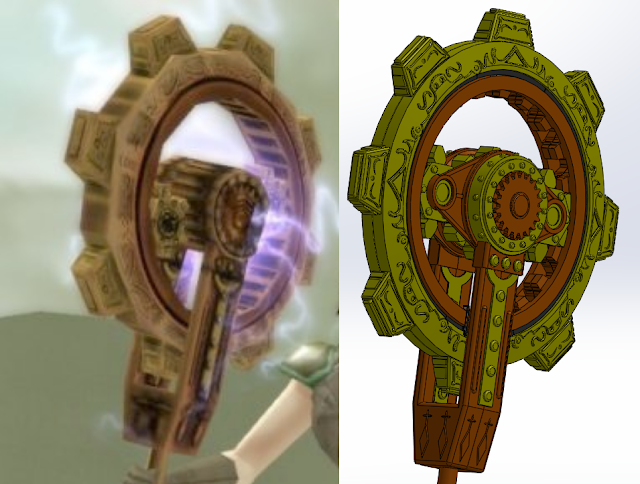 Side by Side. Redrawn nearly entirely from scratch. 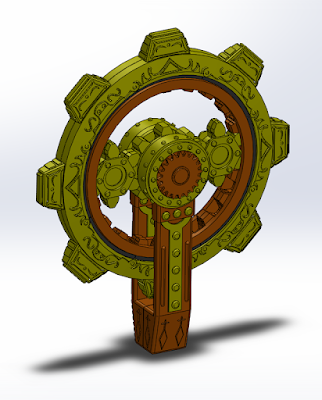 However, you may have already noticed the problem.  The Nemesis Staff isn’t actually a functional planetary gear mechanism, as it only has only two gears and nothing else locating the outer ring.  If I built it as-is, it would be likely to simply fall apart if you tried to rotate it. I considered a few different options on how to fix this, including redesigning it to have three or four gears, or adding some kind of hidden internal support structure to hold the planets and ring in place.

For this prop I decided on making two design changes.  First, I added a hopefully unobtrusive carrier frame to hold the planets in line with the sun gear.  Second, I added a small brace piece to the inside of the fork to grip the ring and hold it in place. The outer ring already had a black line that suggested an inset groove, and a ridge on the brace fit into this did a pretty good job of holding the ring in place.  I also designed the teeth on the planet gears to fit into the sun and ring in such a way to try and lock everything in place once assembled. The result was really tight, tight enough to be difficult to rotate at first, and to be in some danger of damaging the plastic from the forces needed to make it turn.  In retrospect, I could have made it a bit looser. 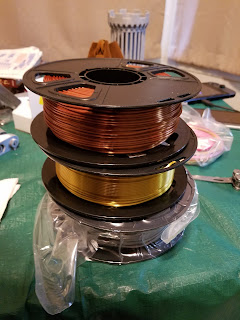 I had decided that to save time, I would design the part to be completely unpainted, using the colors of the bare plastic. I had seen some amazing prints done with metallic Silk PLA, and wanted to try that out.  While I was designing the part, we ordered a few reels of copper and gold silk filament for overnight shipment. These arrived with a free replacement nozzle and a bag of nozzle-cleaning needles. I should have taken this as a warning.  The printing process saw repeated nozzle clogs, the Silk PLA was somewhat tricky to work with, and I think I may have ruined the nozzle in the process.

I had the design mostly done after a weekend of work.  Printing took much longer. The printer was exiled to the spare room where it wouldn’t keep anyone up as it was printing all night, and I had my wife check on it while I was at work as it was printing during the day.  The total print time on all these parts was over 100 hours, but that doesn’t include the multiple prints wasted from clogs that happened halfway through. This was the most demanding print project I’ve ever done, in terms of how many long prints I had to do back-to-back.  Not long after finishing, I did a complete teardown and rebuild of the arms and hot end, as everything was showing a lot of wear although I had been using the printer for years before this. 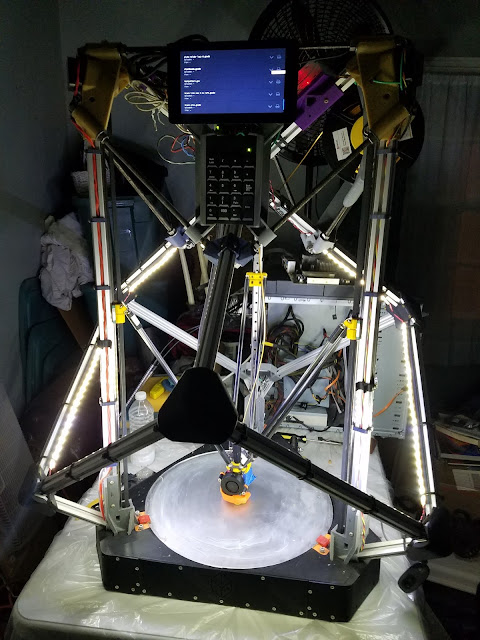 The biggest problem was nozzle clogs happening midway through long prints.  I had a really surprising amount of difficulty printing with the silk PLA. Doing a nozzle flush with clear filament between every print with silk appeared to help, along with cleaning out the nozzle with the cleaning needles that came with the filament.  In retrospect, I suspect I may have been running at slightly too low of a temperature, as Silk should be printed at higher temperatures than normal PLA. 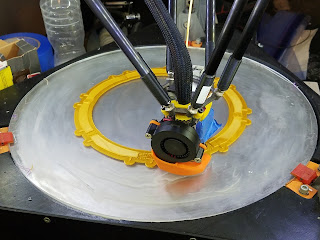 Printing took place over about a week of solid day and night work for my printer.  I was still designing parts of the piece during printing - the outer ring was designed first, with the inner part and fork printed while the large ring pieces were printing.  Some of the larger parts took over a dozen hours to print each, and there were a few print failures due to clogs, with many hours wasted.

Normally, with a complex piece with moving parts like this, I would go through multiple iterations and tweak the geometry until it was right.  But with the schedule I was under, there just wasn’t time. Nearly all of the parts on the finished staff were first draft parts. The clearanced were too tight on many of them, I had to do a bit of sanding to make the ring rotate smoothly, and there was some ominous creaking from the plastic as I tried to make it rotate.  If I was to make another one of these, I’d tweak the geometry and open up the clearances a bit. (Actually, I’d probably redesign the entire thing from scratch, but a quick cleanup would be acceptable if I wanted to make another one of these as-is). 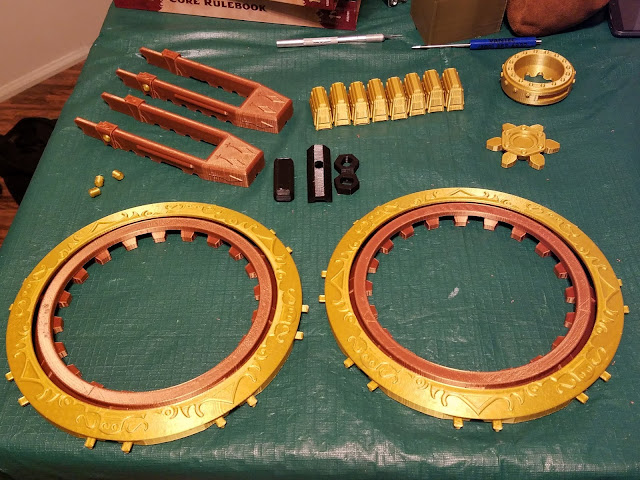 Parts coming along. Getting ready to assemble everything. 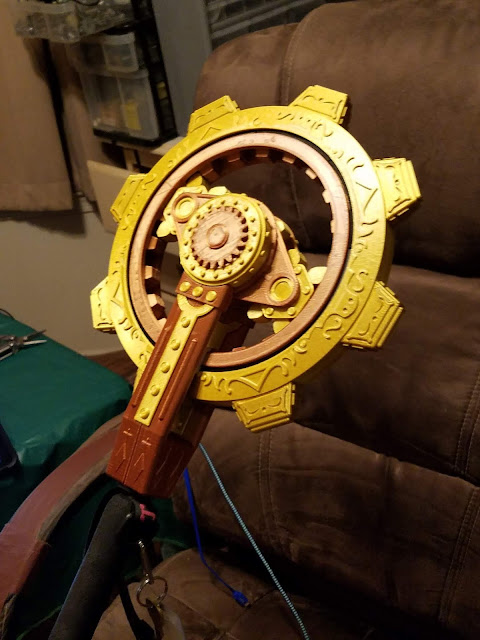 Done. Attached to the first walking stick, which was not the one taken to the convention.

The last part to be designed was a mount to go on my wife’s lightweight walking stick.  Originally I had designed the Nemesis staff topper to attach to the top of her usual walking stick, which had a knob that could be unscrewed to reveal a threaded rod.  While packing she decided that this stick was too large and heavy to take on a plane, so she switched to a lightweight collapsible pole instead. This lacked the threaded rod, so I needed to at the last minute design and print a sort of clamshell clamp that went around the top of it.  It worked, sort of. It was ugly, and in the end relied on zip-ties, tape, and epoxy for structural strength. Not my best work. 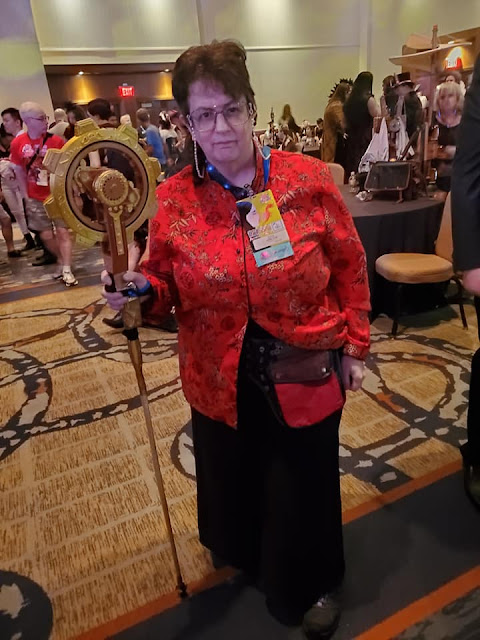 My wife at DragonCon

The piece was finished just barely in time to be packed up for her flight to Atlanta.  She went to the City of Heroes meetup, and attended the steampunk ball, and showed off the piece to a lot of people.  It did eventually break, the last-minute walking staff adaptor breaking apart, and there was also some cracking around the planet gear frame and hub, but nothing that couldn’t be repaired on site.  Overall I consider it a successful design, especially considering how rushed the project was.

After this piece, I started working on a complete redesign.  Aside from the structural problems mentioned previously, this Nemesis Staff was too small.  Comparing the finished piece to the screenshots from the game, it came out about half the size it should.  It’s hard to tell exactly, since all character objects scale with the size of the character, but from comparing the picture of my wife to the images from the game, it’s clearly too small.

Scaling it up would make some of the mechanical parts easier to make, I’d have enough thickness for better axles and bearings.  In fact, with a bit of work, I could even fit motors and batteries in, and make it rotate. And if I was making it rotate, I might as well also install lighting and sound effects, to make it look and sound more like the actual weapon from the game. 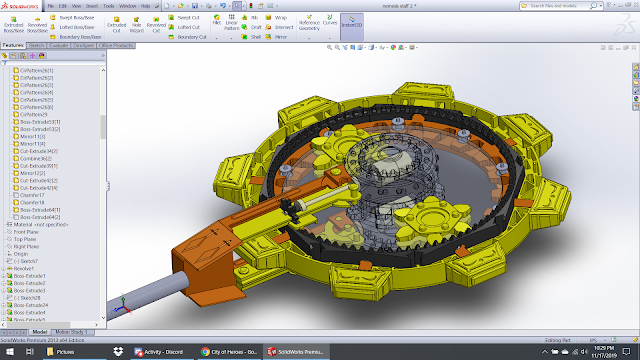 Motors and bearings and working gears, and eventually lights and sound.

That fully working design has been put on hold for now.  I did enough modeling to determine that it would be practical, but haven’t done much more work than that for now.  If my wife wants to cosplay at a convention again, I’ll probably finish the design, but until then I have other more pressing projects to work on.

STL files for this have been posted at Thingiverse.

Posted by ellindsey at 4:57 PM