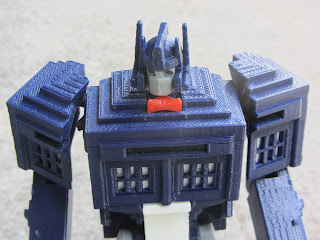 I designed the original version of this toy as a personal challenge to see if I could - and in the process learned a lot about how to design complex moving parts for 3D printing.  The design was vastly more successful and popular than I expected, resulting in a lot of requests for printed copies, but I wasn't really happy with it.  The major body joints - hip, knee, waist, elbow - were all too wobbly and weak.  In robot form, the toy couldn't stand on its own, and the legs would sometimes even fall out when it was picked up.  The Tardis form didn't lock together well, with the legs spontaneously unfolding sometimes when picked up.  Several of the pin joints were prone to breaking, too much force applied across the grain of thin plastic pins.  It was also expensive and time-consuming to print, taking over a pound of plastic and several days of machine time. 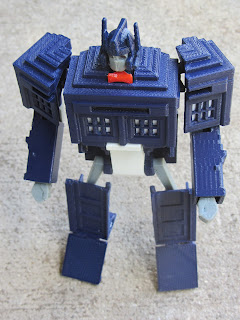 I started over from scratch with the design, to make something more suited to be a mass-produced toy.  I scaled the original Tardis form by two-thirds (originally tried one-half scale, but my machine couldn't print the details small enough) and rethought every part of the toy to be simpler, easier to make, and more durable.  In the end I managed to reduce the weight to only six ounces, and reduced the part count from 71 to 36.  I also greatly simplified the leg joints, replacing the troublesome hip mechanism with one that used only horizontal pins that wouldn't fall out when the toy was picked up yet were still stiff enough to allow it to stand. 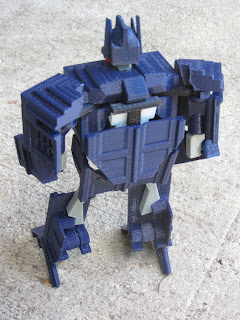 The torso has been significantly changed.  I kept the same shoulder articulation, but eliminated the sliding panels and telescoping neck in favor of simply rotating the head out through the open back.  The swinging windows panels are also eliminated, the back of the torso instead being closed by a piece of the lower back which swings up as the abdomen folds in.

The back of the legs are still fairly open, and the feet are basically just empty bits of body shell folded forward.  The legs were a major hassle to design, the new torso and abdomen structure took up a lot of the interior and in the end I was having to try and figure out how to fold stray scraps of Tardis shell panels into convincing legs and feet. 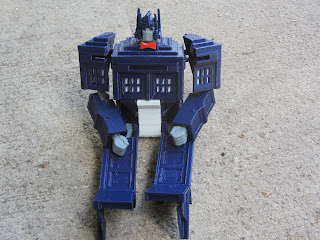 It can still sit down, but that's pretty much the extent of the leg articulation.  I had to sacrifice a lot of degrees of freedom in the waist and hips to make the body stiff enough to stand on its own.  The arms still have most of their mobility, although I did have to sacrifice the wrist joint.  There's just not enough room in the scaled-down hands to fit a plastic rotation pin inside. 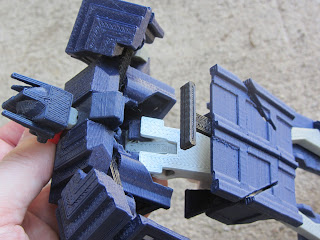 Transformation starts by pulling down on the hips, unfolding the abdomen, lining up the lower back and hip plates, and then swinging the head back into the torso. 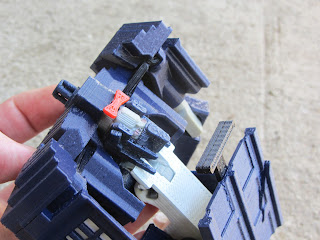 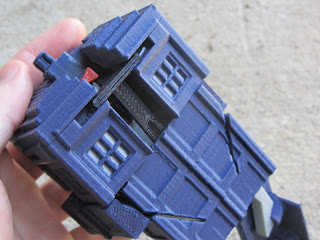 You then pull the telescoping black bar (that holds the head pivot stable in robot mode) upwards, swing the shoulder blocks inwards, and slot them together as shown.  This locks together tightly to make the top of the Tardis.  It took a lot of tweaking to get this to work properly, and I still think the bar is a little looser than it should be.
Getting the forearms into place is a little tricky.  There are pins and holes on the torso and forearm parts which lock them together in Tardis mode.  They're a little too secure - it's difficult to get the arms into place, and once in place they really don't want to come loose.  I still might need to adjust the clearances on these parts. 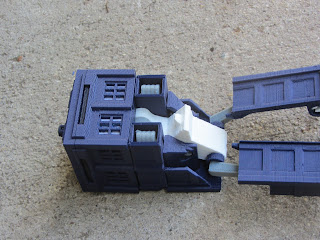 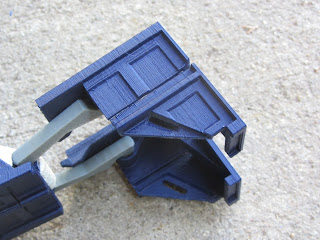 Transforming the legs is simple.  The feet fold back 135 degrees, making the flat bottom of the Tardis.  Note the recessed area and slot on the back of the folded leg assembly. 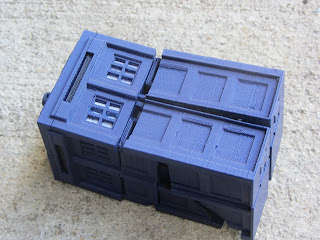 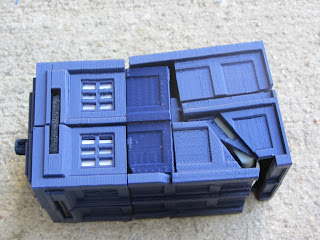 Then the legs fold forward and up.  A small post on the inner corner of each lower leg piece slots into a recess on the underside of the torso block, and the indented part on the back of the folded foot tucks into a locking ridge on the hips.  I didn't want this version to have the same problem with the legs spontaneously unfolding when picked up in Tardis mode. 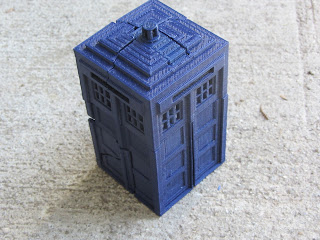 It locks together extremely solidly in this form.  You can pick the Tardis up by any part of its structure and carry it around and it won't unfold or come apart - a huge improvement on the earlier version, which needed to be supported from the bottom when carried. 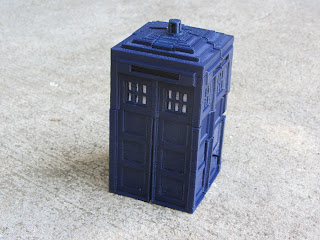 Still to do on this one:  make decals.  I wasn't happy with the look of the glued-on paper labels on the earlier version, so I'm looking for sticker paper that will work in my inkjet printer.  I'm also not sure how legible the labels will be when scaled down to this size.  When in Tardis mode, it's a surprisingly small toy - it's only four and a half inches tall, and two and a half inches wide.  Even in robot mode, it stands under nine inches tall. 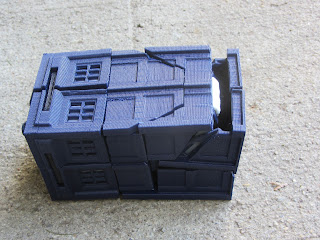 It's almost like one of those puzzle boxes in this form, where you need to know exactly where to push on the outside to unlock it.  You start by pulling downward on the feet, at the back rear of the Tardis to unlock the friction tabs holding them in place. 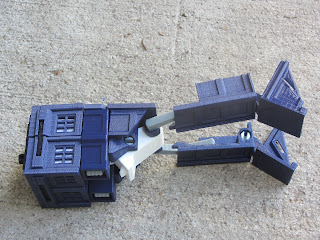 You then pull the legs downwards and straighten them out as shown.  The pin joints in the hips and knees are angled such that the legs spread out slightly when unfolded.  Unfolding the legs also lets you loosen up the abdomen and torso parts enough to free the arms and shoulders. 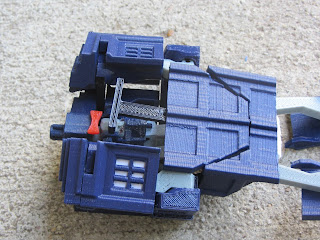 The shoulder joints slide sideways with a little force, and the forearms come out at the same time.  It can stand in this form, even through the abdomen isn't properly locked together yet. 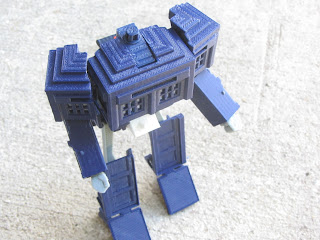 After freeing up the arms and shoulders, you rotate the head assembly 180 degrees to bring the head out of the torso, then slide the abdomen up to fold and lock the body.  The black bar on the back locks into the notch at the top of the abdomen and holds the head-pivot in place.  The rest of the back of the Tardis splits, the upper half becoming the rest of the back, and the lower half a sort of plate around the hips. 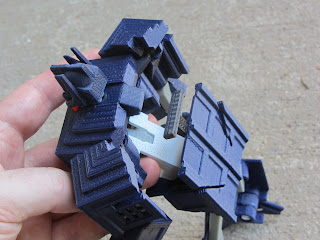 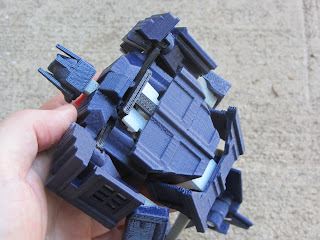 Straighten out the legs, and the robot stands easily on its own.  It's not very poseable, but I've decided that being able to stand is better than being a highly flexible plastic ragdoll. 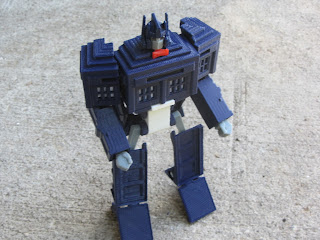 That's version 2 of the design.  Like the original version of the toy, it was Featured on Thingiverse within a few days of being posted.  As of this writing the original version is at the top of the Popular Things list.  I don't expect this version to do quite as well - honestly I'm surprised that it was Featured at all - but it's gratifying to hear that other people are already printing their own copies.

Version 2 of this toy was a lot harder to design than the original.  Making something robust enough to be sold or given out as a toy is a lot more challenging than making a one-of-a-kind static model.  This design is still fairly crude compared to the actual commercial Transformer toys on the market now.  I've gained a lot more respect for what professional toy developers go through. 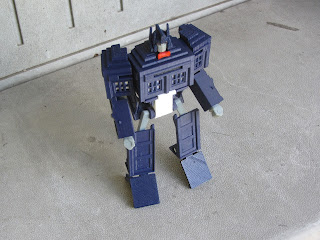 As with the previous version, a lot of people are asking me if I'm going to sell these.  While I may make a handful as gifts or to sell at upcoming conventions, I'm not intending to go into any kind of mass production.  3D printing simply isn't a cost-effective way to make a lot of something.  It's great for making prototypes, or limited runs of unique specialty items, but can't even remotely compete with traditional mass-production techniques like injection molding.  It takes my printer a full day of running nonstop to make the parts for one of these - and then an hour or so of my work finishing and cleaning up all the parts and assembling the toy.  I can't make these fast enough for it to be worth my time as a business.  Setting up mass-production is also out of the question - both due to the steep startup costs of having molds and tooling made, and because any actual commercial endeavor would bring down the wrath of the BBC's copyright lawyers (and possibly Hasbro as well).
Posted by ellindsey at 8:51 AM