I haven't been posting much about my 3D printer lately mostly because I've been busy printing things with it.  The printer itself hasn't changed much since my last post - the biggest upgrade I've made was switching to a geared extruder motor to solve some overheating issues, and installing a Raspberry Pi print server so I can print over the wifi and don't need to keep my laptop physically plugged in to the printer.

What I have been doing with the printer is using it.  I've made custom toys, sculpture, artwork and a few useful things for around home.  Several of my better creations I've put up on Thingiverse.

My most recent creation is this: 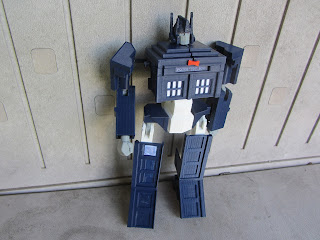 This started a month ago after I saw someone wearing this T-shirt.  I can't look at something like that and not immediately start figuring out how to make it actually work.  I grabbed the 3D files for a printed Tardis box off Thingiverse and spent a few days figuring out how to turn it into a robot. 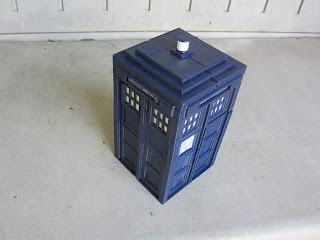 This turned out to be a much bigger project than I expected.  The resulting Transformer has over 70 printed parts and over a pound of plastic.  Designing and printing it, including several batches of failed prototype parts, used up most of a new reel of blue filament from Inventibles.  It came out a lot larger than I expected.  It was also a lot of fun to design and build - I'm getting a real hand for making complex 3D objects in AutoCAD, and being able to design a part, send it to the printer, and then have the actual finished piece an hour later is just amazing.  Getting a 3D printer was the best decision I've made in quite a while.

This toy is the first thing I've uploaded to Thingiverse to be Features, which was nice.  It's also getting a lot of attention on various tech blogs and news sites.  I do have to reiterate that the original idea was not mine and I wouldn't have started on this at all if I hadn't seen Jason Casteel's original artwork.  I just figured out how to actually make it work.

The current version is good enough to show off and upload to Thingiverse, but there's still room for improvement.  The hip joints are kind of weak and the torso is top-heavy enough that it doesn't reliably stand up on its own (which is why I have it leaning against a wall in the above shot).  I'm already working on designing a scaled-down, simpler, and more robust version.  If that goes well, I may have these on sale at the Geek Creation Show in August.
Posted by ellindsey at 1:36 PM