The office Makerbot has been printing nearly constantly for nearly a month now.  It's already more than paid for itself with parts we'd otherwise have to send out for manufacture.  The modifications I've described so far have made it run reliably enough that I can leave it printing unattended in a back room for hours.

I have noticed that the printer is getting noticeably noisier over time.  There's a creaking in certain spots of the X stage travel, a horrible screech when the Y axis moves quickly, and the whole machine shudders and rattles when the Z axis moves downwards at the start of a print.  I've also noticed that it takes a lot of force to manually move the X and Y stages, even when the stepper motors are completely unpowered.  I've decided that my next modification will be to redesign the X and Y stage slides, replacing the oil-impregnated bronze bushings with roller bearings.

First to be rebuilt is the X stage. As shipped the X stage rides on two 9.5mm precision steel rods, each passing through two bronze bushings pressed into ribs in the X stage structure.  This design is over constrained.  The print bed heats the entire X stage, which attempts to expand and pushes sideways on the two steel rods, anchored at their ends in the Y stage.  That's probably the cause of the creaking sound and some of the resistance in the X stage movement.

I ordered a few dozen miniature ball bearings, and then designed printable parts to hold them.  I designed two arrangements of three bearings each, to replace the two bushings on one of the rods.  On the other rod I placed only two bearings, so that the stage is physically located by only one of the rods, with the second only providing vertical support, so that the X stage could expand without pressing sideways on the rods.  The support structures for the bearings now took up most of the space under the X stage, so I joined them together, replacing two of the wooden ribs under the stage. 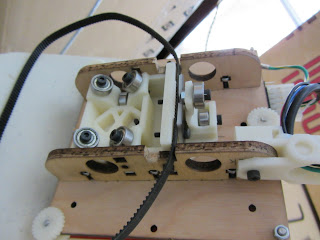 As I did I also replaced the clamping mechanism that clamped the belt to the stage.  On the version of the X stage I built the belt is clamped by two little wooden sticks that are only secured with one bolt each, and easily work loose over time.  I replaced them with a single large piece of plastic, held in place with two screws, to spread the clamping force out and not as easily vibrate loose. 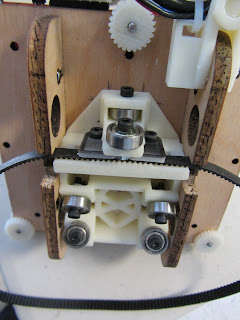 There's really not much room to work with under the X stage.  To get the bearings to fit I had to cut several holes in the X stage mounting plate, and carve a long groove in the Y stage structure to clear the lowermost bearing.  I did manage to get everything to fit, and when I finally reassembled everything and ran the machine there was no creaking as the X stage moved.

The Y stage had been making a terrible screeching sound when moving quickly, so I set about replacing the brass bushings on that next.  Unlike the X stage, the stock ThingOMatic Y stage isn't over constrained.  On one steel rod the Y stage slides on two brass bushings, but on the other it already rides on ball bearings, so the Y stage can float and expand or contract independently.  There's also a lot more space under the Y stage to work with, so I had an easier time designing the bearings in. 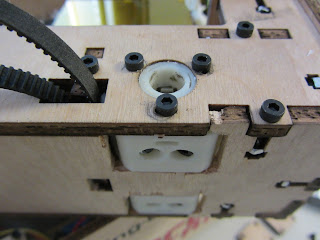 I still had to cut holes on the Y stage bottom plate to fit these in.  Here I replaced each of the brass bushings with a single piece of plastic holding three bearings.  Three screws into the face of each anchor them to the Y stage structure.  It's not quite obvious from looking at it from the outside, but I'm also using the bearing blocks to clamp the belt to the Y stage, replacing the two original little wooden clamps.

After I reassembled the machine and ran it, I found that the noise from the Y stage was completely unchanged!  Moving the Y stage rapidly still resulted in terrible screeching sounds.  On closer inspection I traced the sound to the Y stage belt idler pulley.  Both the Y and X belts in the ThingOMatic have idler pulleys on 4mm bolts, without even a brass bushing let alone bearings.  Over time the bare plastic-on-metal contact gets noisy.

I had previously installed Thingiverse item 12528 on the Y stage idler, so the pulley wouldn't be hanging supported only on one side by the plastic baseplate.  Based on that design, I made a new part to support the pulley with ball bearings on each side. 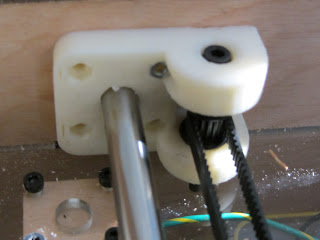 I'm using the same 4mm bolt as an axle, but not instead of the plastic pulley turning on a stationary bolt, the pulley and bolt now spin on two bearings, that are then supported by the plastic bit anchored to the printer structure.  This completely eliminated the Y stage noise.  The Y stage now moves so easily, I have to hold it in place with one hand while trying to remove printed parts from the bed to keep it from sliding around.

For completeness, I've also upgraded the X stage pulley with bearing supports.  This was a much trickier job, again due to the limited space available.  There's barely room in the ends of the Y stage for the pulley as it is.  To get the bearings in there I had to replace the entire upper wooden structural cap on that side with a printed plastic part, and cut a hole in the lower wooden part to fit the support for the lower bearing. 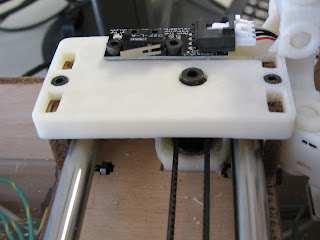 The poor Y stage on this machine has quite a few new holes cut in it now, but both stages are really, really smooth.  The only noise as the machine prints is the singing of the stepper drivers.  It's almost like some kind of music, especially when it prints circles.

The default printing speed set in the ReplicatorG software is 30mm/second.  I had trouble getting the machine to print complex shapes accurately early on, so I dropped the speed to 20mm/second for a while.  Since upgrading the X and Y stages with bearings I've increased the speed back to 30mm/second without noticing any drop in quality.  I even printed a few parts experimentally at 50mm/second.  Some of the surfaces were a little wavy and there were a few small gaps, so I don't think I'll be printing many parts at that speed, but it's nice to see the machine still works fairly well even at that speed.

The next step would be to replace the Z stage bearings, but as the Z stage moves slowly and infrequently, I'm not sure it's worth replacing the bushings there with bearings.
Posted by ellindsey at 7:00 PM